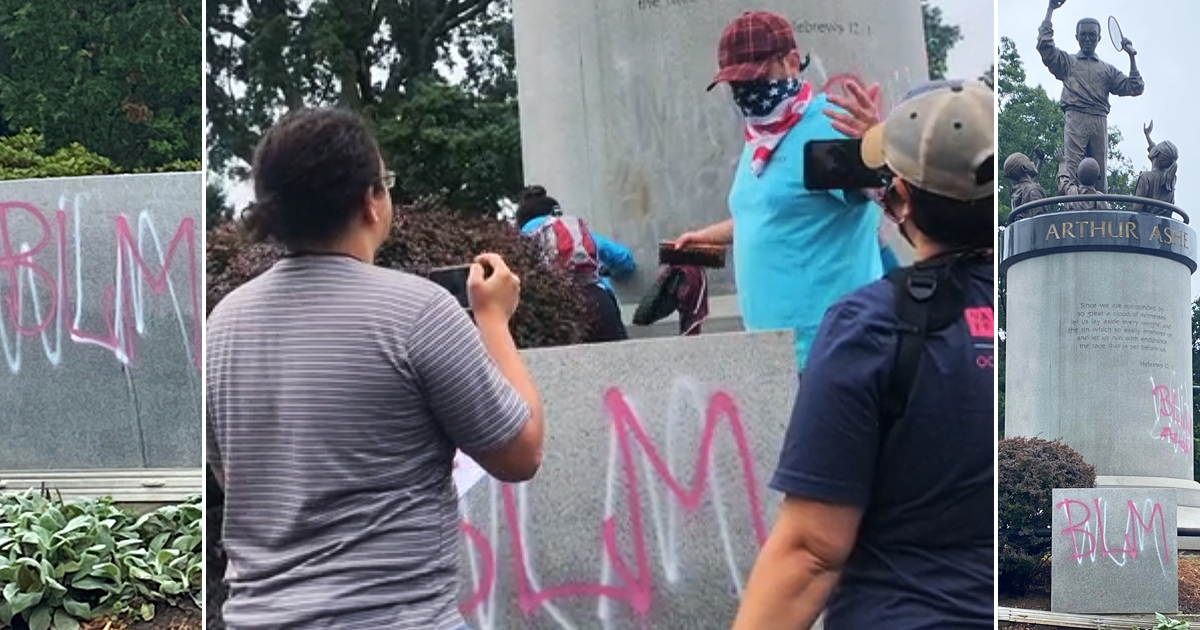 In Richmond, Virginia a story unfolded and escalated rapidly on Wednesday, starting when an unidentified person defaced the statue of legendary tennis player and African-American icon Arthur Ashe on Monument Avenue with “White Lives Matter” in white spray-paint.

Pictures of the graffiti were shared on social media, and local CBS station WTVR aired video of the actual vandalism.

After word got out, and local news was reporting on the graffiti, another unidentified person or persons spray-painted BLM over the message. Locals showed up with scrub brushes, attempting to clean the statue, as reported by ABC 8News Reporter Alex Thorson.

HAPPENING NOW: Arthur Ashe Monument spray painted with “WLM” and “BLM”. Just spoke with a woman who says she saw a man, white, spray painting the WLM about 40 minutes ago. @8NEWS pic.twitter.com/ecYZgK3Zsm

Now people in the area are using wire bristled brushes to clean it off. @8NEWS pic.twitter.com/T9rPUfhfTM

This is 1:00 today.. it appears people are trying to scrub everything off, including the BLM @8NEWS pic.twitter.com/q128Av37Ai

VIDEO: the witness said this man in blue came back after spray painting it once, seen here trying to wash the BLM off of his white graffiti. @8NEWS pic.twitter.com/OZ7jNQDvkZ

Things took a turn when a man, seemingly the original vandal, showed up and attempted to undo the Black Lives Matter message painted over the White Lives Matter graffiti. An argument broke out. Police arrived on the scene. And to top it off, the nephew of Arthur Ashe arrived to the scene as well.

HAPPENING NOW: Argument between people washing vandalism off and a man who just pulled up.

Arthur Ashe’s nephew, David Harris, is walking up to try and de-escalate the situation. @8NEWS pic.twitter.com/CKvQ9Y25vr

More clips and pics from the series of events are included below. One person on the scene claimed another person on scene pulled a gun. It’s a very hectic story and doe not seem to be over.

From throughout the day:

*warning a story….so today started off basic enough, and meeting Fatima for coffee and a walk along Monument Ave… normal walk until we hit Arthur Ashe and a guy was tagging white lives matter on the statue.. 1/4 pic.twitter.com/dRqL8L3Yon

?BREAKING: Someone spray-painted “WLM,” on the Arthur Ashe statue, “BLM” was painted over it.

Ashe, a tennis legend & Richmond native, has the only African American statue on Monument Avenue, amongst the other 5 Confederate leaders. pic.twitter.com/eADAGknL0S

Arthur Ashe memorial tagged with ‘WLM’ before painted over with ‘BLM’
https://t.co/VlLD67HbaS

This story is developing and may be updated.