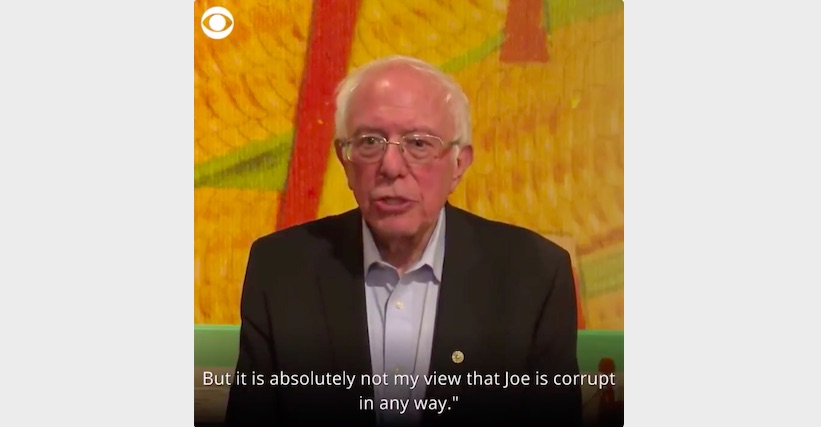 Democratic presidential candidate Bernie Sanders disavowed and apologized for a blistering op-ed written by one of his unofficial campaign surrogates — and amplified by his own campaign spokesperson — that attacked 2020 rival Joe Biden as having a “big corruption problem.”

In an exclusive interview with CBS News, Bernie Sanders pushed back against an op-ed claiming Joe Biden has a “big corruption problem.” https://t.co/4FD1W9jCaK pic.twitter.com/10JhWhaiNo

Zephyr Teachout, a former Democratic Congressional candidate from New York who is an ardent progressive supporter of Sanders’, was the author of the op-ed that appeared in The Guardian on Monday. In it, Teachout mocked Biden’s “middle class” bona fides, called him a “weak candidate,” and alleged he has a “big corruption problem” for taking so many corporate campaign contributions.

Sanders campaign staff both advocated and played coy about the op-ed on Monday. During an appearance on MSNBC, Sanders press secretary Briahna Joy Gray wouldn’t directly endorse or disavow Teachout’s “corruption” accusations. But Sanders speechwriter and frequent online provocateur, David Sirota, dedicated one of the campaign’s “Bern Notice” email newsletters to highlighting the Guardian op-ed, approvingly blasting it out to Sanders’ many supporters.

Biden, notably, made a pledge to never own a single share of stock when he took office in 1972 and he kept that promise until he left the Senate to be President Barack Obama’s vice president in 2009. He also ranked near the very bottom of personal net worth for his entire tenure in Congress.

“I’m sorry that that op-ed appeared,” Sanders told CBS News. “Joe Biden is a friend of mine for many, many years. He’s a very decent guy, and Joe and I have strong disagreements on a number of issues and we’ll argue those disagreements out. But it is absolutely not my view that Joe is corrupt in any way.”

In his comments to CBS News, Sanders did not at any point directly address his own campaign staff’s role in tacitly accepting as well as aggressively pushing out the op-ed to the press and his supporters.