Anthony Bourdain Finally Gives A Candid Post-Mortem On The Taste 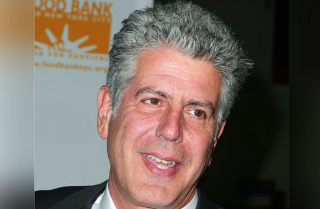 In a wide-ranging interview with the Buffalo News during his nationwide gallavanting tour, Anthony Bourdain finally cracked and gave some of his honest opinions about the ABC reality cooking show The Taste. If you’ll recall, The Taste was widely mocked as a failure, and Bourdain — who built his reputation on being a Cool Cat and was one of the executive producers, along with Nigella Lawson — had the most to lose, reputation-wise.

But while he insisted that he loved the idea of the show (“one mouthful of food” determining success or failure) to begin with,  Bourdain acknowledged that the demands of television began growing more and more unwieldly. “But as is clear, the network gods demand a certain stylebook. I well understood that going on a network show, with that comes layers of makeup, ultra-bright lighting, a lot of noise and cheeseball effects and noisy editing and weeping and rending of garments,” he said. “That’s the playbook.”

And while he didn’t particularly worry about his fanbase complaining that he’d sold out, Bourdain admitted he had fun — and the parts that were obviously Not Fun were left out of his criticism of the show. For instance, let’s play “Guess What’s Missing In The Pull Quote Below”:

For me, it’s always a quality of life issue. Am I having fun? Am I working with people I like spending time with? It was a very different experience to me to commute to work every day, which was awesome, honestly. It was a great experience to work with Nigella and Ludo [Lefebvre].

Your options are A) Brian Malarkey; B) A large, tropical parrot; C) Le Petit Dauphin; or D) All of the above embodied in one bronzed man.