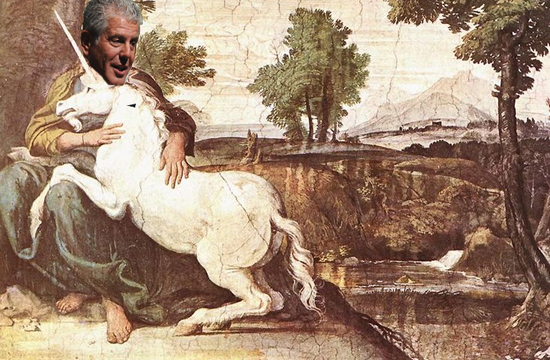 If you’re a litte girl who loves Anthony Bourdain, the natural thing you’d ask him during a Q&A is how to eat a unicorn.

HuffPost Food reports that at the Extra Googa portion of the food/rock festival Googa Mooga Festival held yesterday in Brooklyn, NY, Bourdain told a young fan that he would “roast the loin, grill the legs, braise the forequarter and use the horn to pick your teeth with after the meal.” (We note here at The Braiser that you’d need a lot of napkins to wipe the sparkles from your face.)

On a more serious note, during the hourlong event, he also called out Paula Deen for yet another example of her dietary hypocrisy: way before she announced her own diabetes, Deen responded to his Bourdain’s stinging criticism of her advocacy for deep-fried everything by dismissing him, since he’d once ate warthog rectum “in Africa.” As HuffPost wrote, “Bourdain noted there was ‘possibly a subtext’ to her comment in that warthog anus was eaten in Africa. He didn’t elaborate much beyond pausing before saying ‘in Africa.'”

And “F*&% yeah” he’d also eat people, if he were stranded in a cave or on a boat and felt that his friends weren’t pulling their own weight. But he’d rather eat a bag of Doritos first.

When another person asked him about the James Beard Awards, he wondered aloud why the foundation existed. “Why don’t they turn the house into something useful like a methadone clinic?” he asked.