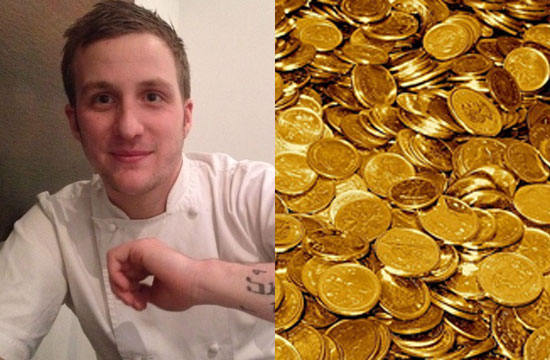 If you’ve never heard of Ben Spalding, let’s just say that he’s worth quite a bit of coinage. In fact, this young British chef is so valuable he’s auctioning off a Christmas dinner for four for £125,000. In American money, that’s $200,850. (For all the Chinese billionaire readers of The Braiser: it’s ￥1,251,250.)

The executive chef at the upscale British pub John Salt is offering this ludicrously expensive dinner through VeryFirstTo.com, the billionaire version of LivingSocial. (That site has deals for space ship flights! That’s the rich people version of forest ziplines.)

The Washington Post notes that although Spalding boasts a distinguished resume, with stints at Per Se, Gordon Ramsay, and The Fat Duck, he’s still a relative newcomer in his early 20’s. In fact, his pub serves “reasonably priced” fare, and Spalding’s relative inexperience raised a few eyebrows for the Post: “One has to wonder who would drop $50,000 on a meal cooked by a young, unknown chef when you could just spend a few hundred for nine courses at Per Se.”

Frankly, the people who would buy this dinner (with the proceeds, thankfully, going to an unnamed charity) are probably the people who like spending money on things like the following, all of which will be featured on the evening’s menu:

We never thought we’d say this, but in comparison to this opulent craziness, three dinners at all three of the restaurants where Spalding has staged would be the frugal option.