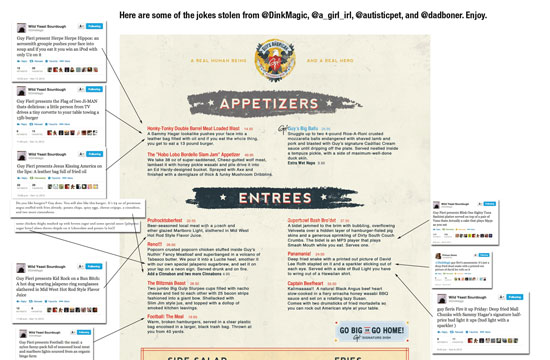 The Fake Guy Fieri menu was the biggest, most viral, most hilarious thing that hit the food world this morning — but thanks to some internet sleuths, we’ve now learned that it was all (probably) a lie! A horrible lie! Now our lives have no meaning.

A few Twitterers, as well as a group of goons from Something Awful (which still exists, apparently) noticed a few similarities between the fake Guy’s American Kitchen and Bar tweeted out by programmer Bryan Mytko, and jokes from a variety of different sources: the Simpsons, Gothamist, and various funny Twitter users (with the most unforgivable gank from our beloved @Dadboner).

After he was called out by the Twitter public, Mytko who’d implicitly taken credit for the menu, immediately put the blame on a friend of his. “I posted it because I thought it was hilarious…If any of the content was stolen from [other people,] well, then I don’t know what to tell you,” he wrote on Something Awful in a defense his detractors immediately called a “non-apology.”

Said friend, Pauline Vassiliadis, has yet to respond to the fake menu controversy, but Twitter user @a_girl_irl compiled a graphic of all the stolen jokes in the menu, which you can see below (click to enlarge): As of now, Mytko’s last response has been a final, bitter volley against the “haters [who might have] picked up a few followers to help fill that empty void in your soul,” followed by a petulant “:: drops mic ::“.