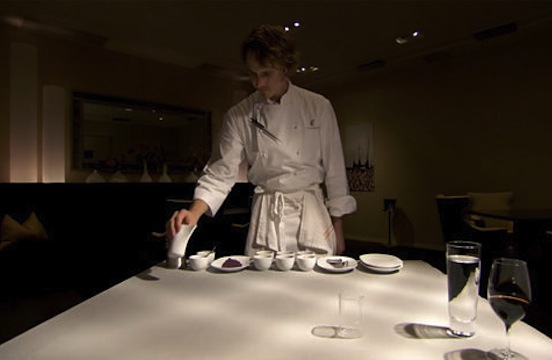 We understand that Grant Achatz is an artist with a capital A, as the director of Spinning Plates says. But that doesn’t mean we’d occasionally like to eat with a fork, Grant.

The newest Achatz interview with Co.Create is as enlightening as it is just downright weird; which, apparently, is exactly how Achatz wants you to feel at Alinea. Because eating like a normal person with silverware is forgettable, right? “We want the customer to be a little confused … Tension is good,” said Achatz to Co.Create. While we get that Achatz and the Alinea team wants to create a “mini-journey” with each and every meal, that doesn’t mean we’d like a fork to accompany us on such an adventure. Says Achatz:

You sit down at the table and you say, “Why do I need to eat with silverware?” And the answer is, “Really, you don’t.” So we created 30 different service pieces that become very connected to the food where it becomes edible sculpture, an art piece in itself. So now you’ve broken down the monotony of traditional eating and you’ve elevated the aesthetics. You’re not wed to your plate or your bowl.

With the modern cooking technology and tools we have now, it’s almost hypocritical to create a plate of food in 2013 on barbaric old serviceware that’s more than 300 years old.

Did you catch that? BARBARIC. And about that “self-supporting skewer” that elevates your food, so lest you use one of those horrendous forks to eat:

The self-supporting skewer elevates one single bit of food over the table surface about fourteen inches. It’s about triggering emotions. The guests are instructed to lean over and take the bite of food off the skewer without using their hands. In a lot of cases, that makes people feel uncomfortable. To relinquish that control and lean forward almost like you’d be bobbing for apples–you’re very vulnerable, especially in a fine dining setting. By intent, it’s kind of intimidating.

… That’s kind of the point. You can literally put the most comforting, homey thing on there and all of a sudden it’s not comforting and homey any more. The tension is good.

Erm… clearly, we just don’t get it. Sorry Grant. Feel free to treat us to one of those mini-journeys to change our minds, though — we could be swayed.