Guy Fieri Films Triple D in Astoria, Everyone in Queens Freaks Out on Twitter 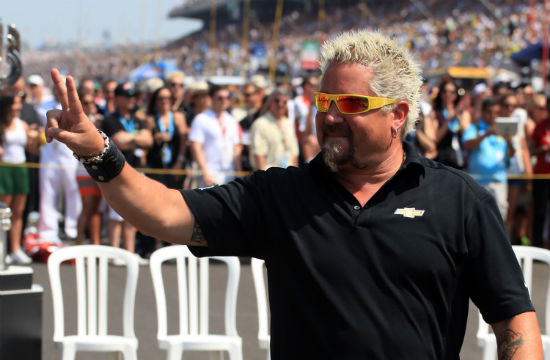 Last night, Guy Fieri was spotted filming Diners, Drive-Ins And Dives in Astoria, Queens, sparking panic among the neighborhood’s residents that the unwashed hordes of Middle America would soon descend upon the borough’s coolest joints, turning them into Kewl Joints that a snooty, self-respecting New Yorker could no longer visit.

The bourgeoisie terror we witnessed on Twitter inspired us to write this dramatic, epic poem about Astoria’s downfall at the hands of Guy Fieri.

Once upon a midnight dreary, while I pondered weak and weary,
Over many a quaint and curious artisan ham of forgotten boars,
While I nodded, nearly napping, suddenly there came a tapping,
As of some one gently rapping, rapping at my diner’s door.
“‘Tis some visitor,” I muttered, “at my New York diner’s door –
Only this, and nothing more.”

The Queen’s Comfort was hopping, all the yuppies’ wallets dropping
cash in exchange for disco tots and rare artisanal pours.
“Surely,” said I, “surely that is a hobo at my window lattice;
Or maybe an Astorian clad in flannel at my door —
Let my heart be still a moment and this mystery explore; —
‘Tis the wind and nothing more!’

Open here I flung the curtain, when, with many steps uncertain,
In there stepped a portly bro of flaming shirt and kewl decor.
‘Twas the demon Guy Fieri; with a camera crew so scary;
darkening the presence of my New York diner’s door –
And the hipsters turned to stare at Fieri in my diner’s door –
Turned, and sighed, and nothing more.

Then a woman, midst of eating, took her phone out and was tweeting
warnings that the good Queen’s Comfort was now washed up on the shore.
“Pardon, but that’s quite unreasonable; you,” I said, “must see it’s feasible
that this show might bring some brand-new diners knocking at my door —
Tell me that at least you’ll eat here, as you did with love before!”
Said the hip girl, “Nevermore.”

Angry hipsters were now rising with their iPhones mesmerizing,
haunting Guy Fieri, tweeting everything he said and wore,
Stalking him throughout the borough, with a vengeance swift and thorough,
followed fast and followed faster, marking e’ry bar and store –
noting which new Triple-D featured locales they would deplore
with gracing “Never-nevermore.”‘

“Fieri!” said I, “thing of evil! — chef, perhaps, or deep-fried devil! —
Why do they assail you soundly in their hipster cred tweet war?
Yea, your show is much reviled, in this enclave on the isle —
New York’s coolest flee in terror when you step upon our shores —
But will my diners ever return? Tell me — tell me, I implore!”
Quoth Fieri, “Nevermore.”

And Fieri, making millions, still is filming, still is filming
On the hard-knock streets of Queens, which are much different than before;
And our hood right now is seeming much like Times Square — corporate, gleaming,
And Astoria is a Flavor Town with tourists we abhor;
And my soul’s attached to a Food Network pilot like a whore,
My fancy New York cred is nevermore!