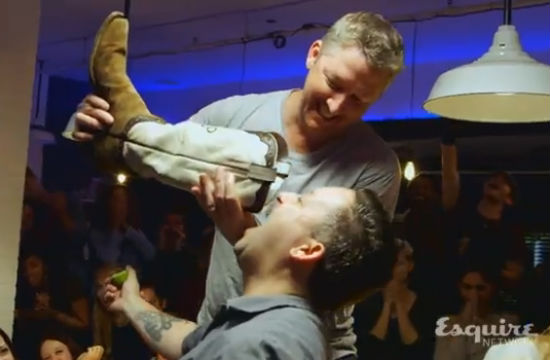 Check out a sneak peek and a full rundown of the episode lineups below.

Whole Pig (April 15, 9p e/p) — The smack talk starts early when chef Tim Love, the king of Texas cuisine, takes on D.C. chef and Italian bruiser Mike Isabella of Graffiato in the hour‐long season premiere. Their task: break down and cook an entire pig for guest judges Kris Morningstar and Naomi Pomeroy. To keep things interesting, the two place their own unusual side bet involving tequila…and a shoe.

Oxtails (April 22, 9p e/p) ‐‐ Guest judges Kris Morningstar and Naomi Pomeroy preside over an oxtail battle between Italian culinary master Freddy Vargas of Scarpetta and modernist chef Justin Wills of Oregon’s Restaurant Beck. While Vargas struggles to contain his nerves against the recent James Beard Award nominee, Wills is faced with a problem of his own: an unfamiliar pressure cooker.

Live King Crab (April 22, 9:30p e/p) ‐‐ Houston chef Chris Shepherd of Underbelly has never cooked king crab before. But his challenge pales in comparison to that of his opponent, L.A.’s Brooke Williamson of Triple and Hudson House, who has to not only beat Shepherd, but also impress her old boss, the notoriously exacting guest judge, Josiah Citrin.

Cardoons (April 29, 9p e/p) ‐‐ It’s a showdown between two L.A. rivals as the innovative chef of La Poubelle, Johnny Zone, takes on former minor league pitcher Michael Teich of The Wallace in front of guest judges Naomi Pomeroy and Kris Morningstar. But neither competitor is fully prepared for the secret ingredient he is forced to face: the thistly relative of the artichoke, cardoons.

Sea Snails (April 29, 9:30p e/p) ‐‐ In a battle of two of the restaurant world’s most influential chefs, godfathers of the L.A. culinary scene Mark Peele of Campanile and Sal Marino of Il Grano put their friendship aside as they prepare sea snails—and teach a master class on cooking in the process—for guest judges Krista Simmons and Josiah Citrin.

Sweetbreads (May 6, 9p e/p) ‐‐ Ilan has a troubling surprise for up‐and‐coming chefs Jessica Christensen of City Tavern and Kevin Luzande of Acabar: sweetbreads. Which will fare better, Christensen’s comfort food or Luzande’s exotic flavors? It’s up to guest judges Naomi Pomeroy and Kris Morningstar to decide.

Pig’s Ear (May 6, 9:30p e/p) ‐‐ It’s a fight for culinary supremacy in the Pacific Northwest, as two of Portland’s finest, Benjamin Bettinger of Imperial and Patrick McKee of Paley’s Place, duke it out over pig’s ear and rabbit with not only the judges, Krista Simmons and Josiah Citrin, but their mentor and boss, Vitaly Paley, looking on.

Blood (May 13, 9p e/p) ‐‐ Using his signature straightforward flavors, Tin Vuong of Abigail takes on the modern Vietnamese style of Perry Cheung of Phorage in front of guest judges Krista Simmons and Brendan Collins. Vuong learned to cook from his grandmother, while Cheung started out under acclaimed chef Charles Phan. But there’s a good chance neither mentor prepared their protégés for tonight’s secret ingredient: blood.

Bison (May 20, 9p e/p) ‐‐ In the Battle of the Big Easy, Gatreau’s and recent James Beard Award nominee Sue Zemanick gets her chance for revenge as she challenges the man who once fired her from his kitchen, Tory McPhail of Commander’s Palace. With a knife—and more than a little pride—on the line, the two cook bison for guest judges Krista Simmons and Brendan Collins.