20 Hot Restaurants with Unisex or Gender-Inclusive Bathrooms, For Your Comfort 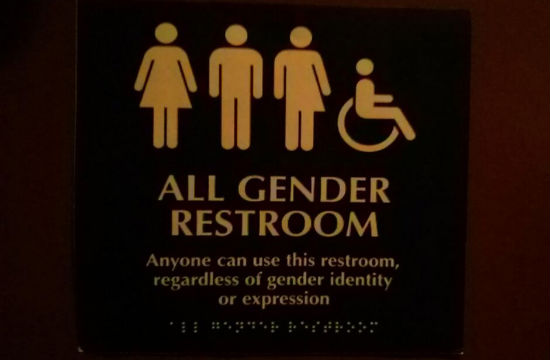 Best friends, colleagues, relatives, and dates know this about me, if nothing else: food is my day job, so no, I do not want to pick the restaurant. I’m happy to give you a recommendation for your anniversary, reunion, parents coming into town, first date, breakup date, the date that will get you laid, etc. But a lot of my identity is wrapped up in being a caretaker, and so I get stressy about being a good hostess. A perfect hostess.

I also have a ton of restaurants at play in my mental Rolodex, and it’s a harrowing process to go through each one and carefully consider its cuisine, vibe, price point, and musical tastes, juxtaposed against the food preferences, socio-economic status, Biggie-or-Tupac alliance, and relationship to me of my guest, whom, in some cases, I might just be getting to know. And with the weight of all that deliberation behind every effort, I invariably take it really, really hard when my companion seems blasé about the menu, or picks at their plate, or is disappointed by the atmosphere or otherwise finds fault with the choice because I’m “the food person.”

Lately, my most bile-inducing anxiety revolves around tucking into a seemingly perfect restaurant for my circumstances with non-cisgender company, only to realize with inexplicable embarrassment and sinking horror that the bathroom options at my chosen establishment are Male or Female only. It feels roughly equivalent to sticking all of the feet of all of the people in the entire dining room, collectively, into my mouth.

Normally, we won’t address it. If we do, it’s for me to make a charmingly self-deprecating remark about my cis-privilege or for them to reassure me that it’s totally fine, because everything S. Bear Bergman wrote in that essay on “Tranny Bladder” is true, that they can easily last a dinner without a bathroom break. I try not to hate myself and order two desserts.

Yes, sir, you in the back. You’d like to how, if at all, any of this really matters to a restaurant. Well, sometimes it doesn’t. Sometimes no one makes a fuss, and everyone involved in sharing bathroom space is discreet and respectful and an otherwise responsible member of society, who understands that relieving oneself in peace is a basic human liberty, and you’re right. It doesn’t really matter.

Other times, a woman tattles to the bouncer that there’s some sort of predator in the Ladies’ when, not two hours previously, that “predator” was in a tense conversation with the bouncer outside over not even being allowed into the bar, because their ID is clearly fake, because the gender on it doesn’t match the gender said bouncer is reading off the person, and on and on this squabble goes, until the person is forced to unzip their hoodie and physically show the bouncer the curve of their chest, which they were trying really, really hard to conceal, but, no, man, it’s cool, can they just have their ID back and go inside now? (Meanwhile, I am deceased on the sidewalk.) And so now that makes two bouncer altercations in one night, which most people can attest is not the best way to enjoy an evening. So you know. Sometimes it matters.

I have co-workers who can bear witness to the fact that, when Rob Sietsema tweeted this photo of the bathroom sign at Larb Udon, my hands flew literally up to my mouth and I sniffed back some welled-up face liquids, hard, because badasses do not cry at the office:

Amazing sign on the door of Thai restaurant restroom on 9th Ave pic.twitter.com/UGoAsrDodt

And, really, it’s impossible to learn what exactly a restaurant’s bathroom situation will be (as forthcoming as Pete Wells is about Wheelchair Access) unless you cold-call them all at 11pm with a soup bowl of cab sav in hand. But I did that. Because I want to be a good hostess. Also, because we don’t have an intern right now who could do it for me.

So in no particular order, here’s a list of the buzziest bars and restaurants you’re reading about right now*, which have either unisex or gender-inclusive restrooms, confirmed either in person by a Braiser staffer or by a restaurant staff member**:

On the upside: most of these and other painfully hip spots are teeny, and small restaurants only have space for one or two single-stall bathrooms. This works in your favor. The monster 150+ seaters are more likely to have binary gendered, multiple-stall bathrooms. (For the record, Guy’s American Kitchen + Bar does not have a unisex restroom. I know. I’m sorry.)

*Yes, it’s a New York-centric list, for now. My national research capabilities are limited by our aforementioned intern status. Feel free to add your nationwide favorites in the comments below, and we’ll keep the list updated. We’ve only scratched the surface of buzzy restaurants in New York with gender-inclusive restrooms, so we’d love to hear from places who’d like to be added to the list, as well. (Read: For the love of god, someone in Queens, email us). Keep us informed at [email protected].

**I started to get the feeling part-way through that some of the single-stall establishments were lying to me based on the way I framed the question. (Or, queer-baiting is mean; don’t do it.) For example, I know that Mission Chinese has 2 single-stall bathrooms labeled M and F, so, in a pinch, at least no one is beating you out of the powder room with a purse. But please be advised that some of the restaurants mentioned above may have M/F signs on the doors, which they’d like you to consider as suggestions, and not as definitive labels. Which, that’s not really how that works, but we can at least confirm that they’re all private stalls.

UPDATE: Art Smith weighed in with the following comment:

“I have one Unisex bathroom at Table 52 and upstairs Men’s and Women’s. Equality for [the lesbian and gay community] is here but not for [the] transgender [one]. I think our brothers and sisters in the transgender community are discriminated against badly by gender-enforced bathrooms. Let people be and pee where they wish. I am not pee shy!”

As if there was ever any doubt. Add it to the list, Chicago: Table 52.