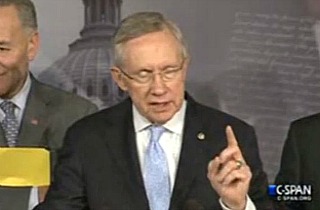 After canvassing Senate Democrats for a week, Senate Majority Leader Harry Reid (D-NV) is preparing to go nuclear. According to reports, the Democratic leader in the Senate has asked members to come to the floor of the upper chamber to vote on a rules change in the Senate which would prevent minority members from filibustering with the intention of blocking President Barack Obama’s judicial nominees. It is precisely the same tactic he tore into as an assault on democracy when Democrats were in the minority and practicing precisely the same tactic in 2005.

After rejecting a Republican proposal which would reform the filibuster, a negotiation process which has been ongoing since 2005, Reid will reportedly seek a simple majority vote to reform the rules of the Senate on Thursday. In all likelihood, he will be able to secure the 51 votes necessary to enact this new reform.

Republicans are wary of the move. Many see it as an abuse of majority powers and the setting of a precedent that Democrats will regret the next time that the Senate changes control. This is a position that Reid agreed with in 2005 when his Democrats were blocking President George W. Bush’s judicial nominees.

“The threat to change Senate rules is a raw abuse of power and will destroy the very checks and balances our founding fathers put in place to prevent absolute power by any one branch of government,” Reid said at the time.

He was joined in this denunciation of Republicans who were also considering the “nuclear option” by a number of his Democratic colleagues.

But not all Democrats are welcoming the measure. Decades-long Senate veteran Carl Levin (D-MI) has been a vocal critic of changing the Senate rules. Some fear that, given the increasingly competitive 2014 political landscape, it will be months rather than years before the Democrats are again the minority party in the upper chamber of Congress.

For his part, Reid is unconcerned about this possible outcome.

“I love Carl Levin, OK? He’s one of my friends. We’re going to miss him so very, very much,” Reid said of his colleague on Tuesday. “But the world’s not like it was 30 years ago. Different world here.”