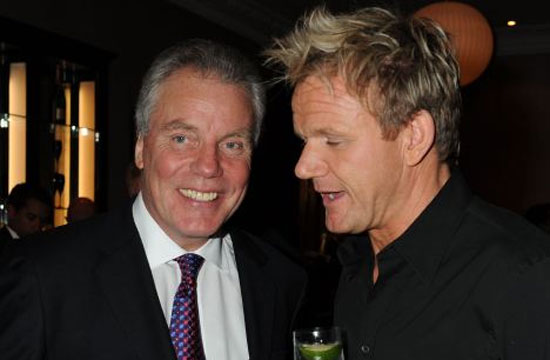 There’s bitterness, and then there’s Chris Hutcheson, the father-in-law and former business parter of megachef Gordon Ramsay. While we’ve seen our fair share of backbiting (occasionally from Ramsay himself), the sad case of Hutcheson borders on the absurd: the man just tried to get the British government to break up his son-in-law’s restaurant empire in retaliation for being cut out of the business, and a court dismissed his petition to do so yesterday.

To recap: Ramsay and Hutcheson, the 63-year-old father of Gordon’s wife Tanya, used to be business partners, and together they built the vast Gordon Ramsay Holdings with 24 restaurants around the world, with Chris as the CEO and Gordon as the craggy, bloviating figurehead.

But everything changed in 2010 when Ramsay discovered that his father-in-law was not only cheating on his wife, but also had two children with that mistress and had used £1.4 million of his company’s money to hide his secret family! (SCANDAL!) After a crossfire of allegations (including drugged-up harrassment, hacking, and questionable business moves), Ramsay offered to buy Hutcheson out of his share of the company for £2 million.

That, however, was not good enough for Hutcheson, who filed a “winding up” petition to the High Court of Justice (the British equivalent to our Court of Appeals) claiming that Gordon Ramsay Holdings owed him money — and that his filing’s timing was due to the rumors that the company was being investigated for tax fraud, which would make Hutcheson look extra saintly.

Hey, Daily Mail! Can you explain all this British legal jargon?

Presenting a winding-up petition to the court is the most serious debt recovery action that can be taken by someone claiming to be a creditor.

Hutcheson will be required to demonstrate he has an unpaid debt that is not in dispute, something Ramsay’s camp suggest he will be unable to do.

Technically, if a judge sided with Hutcheson, the court has the power to order the compulsory liquidation of the Ramsay empire, which includes 24 restaurants around the world. However, it is more likely the matter will be resolved before that stage.

Unfortunately for Hutcheson, the High Court of Justice is an distinguished judicial institution, and not Andy Cohen. The case was dismissed last night, according to the Evening Standard, likely with the admonition that the High Court was not to be used for bitter familial feuds.

[The Daily Mail and Evening Standard via Eater]