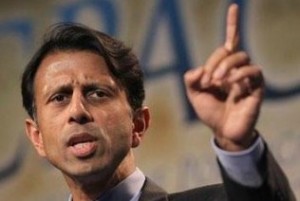 Louisiana Gov. Bobby Jindal penned an op-ed published in POLITICO on Thursday — about none other than the fiscal cliff negotiations. Noting the leverage President Obama and Democrats have, Jindal warned of the consequences of the election… while also offering a word of advice to his Republican colleagues.

“It appears clear to me that with President Obama having created a brand new entitlement program and having won re-election, and with our hand of cards in the Senate being weaker not stronger, and with Secretary Geithner’s laughable public offering last week, whatever deal is reached is going to contain elements that are detrimental to our economy,” Jindal wrote. “Elections have consequences, and the country is going to feel those consequences soon.”

That being the case, Jindal advised his party on how to approach negotiations — namely that they “certainly should fight to at least get something done that will matter.” He added:

At present, any reading of the headlines over the past week indicates that Republicans are fighting to protect the rich and cut benefits for seniors. It may be possible to have worse political positioning than that, but I’m not sure how.

As for what to fight for, Jindal offered some options on that front as well. Including: federal balanced budget amendment, super majority to increase taxes, cap on discretionary and mandatory federal spending by fixing a limit on it tied to a percentage of GDP, and term limits.

“Now that I’ve offended everyone in Washington,” Jindal concluded with his final thoughts about economic growth. It’s not the first time the governor has chimed in with his two cents. Since the election, he’s criticized Mitt Romney for “dividing American voters,” urged the GOP to stop pushing “dumbed-down conservatism,” and declared, “We don’t win elections by insulting voters.”

Read the full op-ed over at POLITICO.

Have a tip we should know? [email protected]e.com