We Can't Even with Guy Fieri's Cheesecake Challenge

We Can’t Even with Guy Fieri’s Cheesecake Challenge 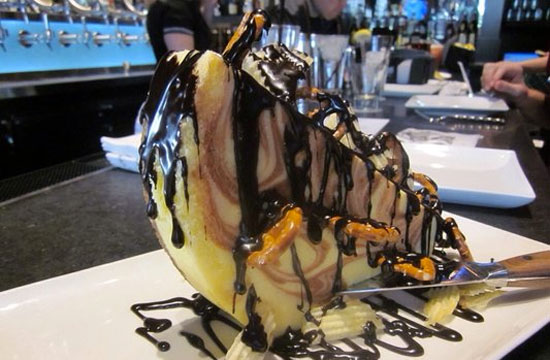 Andrew Kiraly at KNPR has written a restaurant review that deserves to go in the Guy Fieri Takedown Hall o’ Fame — not just for his expert wielding of fifty-cent words, but also for bringing the world knowledge of the Guy Fieri Cheesecake Challenge.

As he describes the monstrosity above, served (we believe) exclusively at Fieri’s Vegas Kitchen + Bar:

I’ve heard dining critics talk about certain dishes being so insistently, so uniquely themselves that you can sense the personality of the chef behind them, as though the food wasn’t so much food as a preverbal, nutritive medium of communication — at once primal and sophisticated, sensuous yet spiritual. Never quite got what they were talking about. Until the Cheesecake Challenge arrived. It is half a cheesecake studded with pretzels and potato chips, then zigzagged with a drizzle of hot fudge. But the telling, crucial detail is how the half-cheesecake is presented. Instead of sitting flat — commonsense, quotidian, even jejune — the cheesecake is set on its edge like a wheel, so it presents itself as a sort of runaway half of a dirty and broken Thundarr the Barbarian moon that’s been ripped out of orbit by cosmic forces beyond our reckoning.

We’d also chime in with words that could adequately describe this, but…no, Kiraly, you owned this one. Bravo. (Oh, wait! It looks like what would happen if the apes murdered the monolith from 2001: A Space Odyssey and then collectively took dumps all over it! There we go.)

As to anyone who eats this thing, are you a giant? Because this is food for giants.