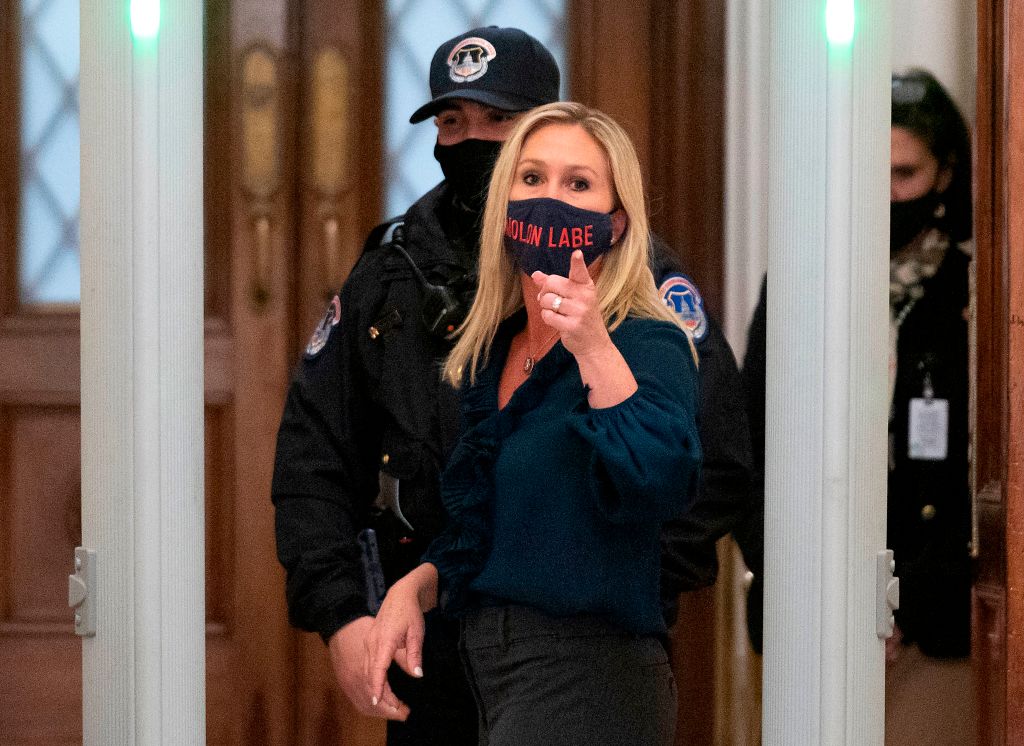 According to an exposé by CNN’s Andrew Kaczynski, the Republican House member used her Facebook page to spread toxic conspiracies and lend her support to direct calls for violence against Democratic opponents of President Donald Trump in 2018 and 2019.

In particular, Greene often targeted Democratic House Speaker Nancy Pelosi in her vitriol and, in one exchange, like a reply that advocated removing Pelosi by saying “a bullet to the head would be quicker.”

Before she ran for Congress in 2020, Greene created a White House petition in January 2019 to impeach the House speaker for “crimes of treason,” citing Pelosi’s support of so-called sanctuary policies that “are serving illegals and not United States citizens” and because Pelosi did not support Trump’s border wall.

“She’s a traitor to our country, she’s guilty of treason,” Greene says in the video, which she posted on Facebook at the time. “She took an oath to protect American citizens and uphold our laws. And she gives aid and comfort to our enemies who illegally invade our land. That’s what treason is. And by our law representatives and senators can be kicked out and no longer serve in our government. And it’s, uh, it’s a crime punishable by death is what treason is. Nancy Pelosi is guilty of treason.”

At another point, Greene also lashed out at gun control activist and Parkland mass shooting survivor David Hogg as “#littleHitler.” In 2018, she had pushed the absurd conspiracy theory that that massacre — as well as the mass shooting at Sandy Hook elementary — was a “false flag” staged event.

When contacted by Kaczynski, Greene didn’t deny any of the activities on her Facebook account, but she nonetheless attacked “fake news CNN” for a “hit piece.” She then tried to defend the posts by saying she had given others control over administering her social media and that these unnamed people posted things she now disagrees with.

“Over the years, I’ve had teams of people manage my pages,” Greene claimed, without presenting any evidence back up the assertion. “Many posts have been liked. Many posts have been shared. Some did not represent my views. Especially the ones that CNN is about to spread across the internet.”

Greene, of course, was seen and heard in one Facebook Live post personally calling for the execution of Pelosi based on a crackpot conspiracy charge of treason.

Fake News CNN is writing yet another hit piece on me focused on my time before running for political office.

I will never back down to the enemy of the American people and neither should you. pic.twitter.com/K3JuvqrDGS