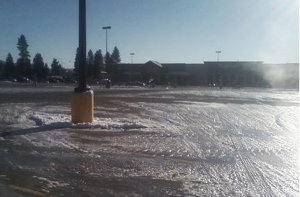 A woman is dead after a 2-year-old accidentally shot and killed her inside an Idaho Wal-Mart on Tuesday, according to KREM. The toddler reportedly reached into her purse, grabbed a gun, and shot it by accident. The 29-year-old woman was shopping with four kids. It is unclear if she was the toddler’s mother.

The store has since been evacuated and is closed. Investigators, with the help of surveillance video and eyewitness testimony, determined it to be an accident. The woman reportedly had a concealed weapons permit and is not from the area. She was believed to be visiting for the holidays.

The incident occurred in Hayden, Idaho, which is about 40 miles northeast of Spokane, Washington. The woman and the four kids were reportedly in the back of the store in the electronics section.

.@KCSO_LtMiller says this was a tragic accident. He says he believes family was in town visiting for holidays.

.@KCSO_LtMiller says waiting to notify more family members before he releases more information on victim. Says she was shopping 3 other kids

KCSO on scene of a shooting at Hayden Walmart. Store has been closed. 1 female victim. Gathering details. More to follow.

Per Walmart mngr Hayden store will be closed through today. Reopen 6am on the 31st.

Watch the report below, via KREM:

UPDATE — 3:55 P.M. ET: Early reports said the 29-year-old woman was the mother of the toddler, but many reports now suggest it is unclear whether she was the toddler’s mother. We have updated the headline accordingly.