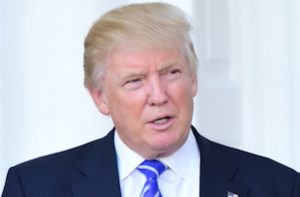 After months of denouncing a major global investment bank on the 2016 campaign trail, President-elect Donald Trump is reportedly considering its president for a top position in his administration.

Politico broke the news Wednesday that Trump is considering Goldman Sachs President Gary Cohn for his director of the Office of Management and Budget, citing multiple sources. Cohn has given large sums of money to both Democrats and Republicans and “is friendly with Trump’s powerful son-in-law, Jared Kushner.”

Trump frequently invoked Goldman Sachs in his attacks on both the general election and primary opponents. In the primaries, Trump took particular aim at the fact that Senator Ted Cruz failed to disclose a donation from the bank during his Senate run.

Was there another loan that Ted Cruz FORGOT to file. Goldman Sachs owns him, he will do anything they demand. Not much of a reformer!

Cruz says I supported TARP, which gave $25 million to Goldman Sachs, the bank which loaned him the money he didn’t disclose. Puppet!

Is Cruz honest? He is in bed w/ Wall St. & is funded by Goldman Sachs/Citi, low interest loans. No legal disclosure & never sold off assets.