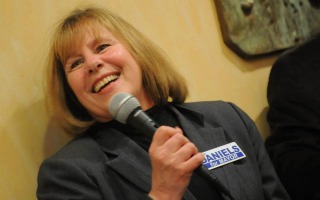 Troy, Michigan’s Mayor Janice Daniels is facing calls to resign following a comment she posted to her Facebook page over the summer.

On June 25th — one day after the state allowed same-sex couples to get married — Daniels shared that “I think I am going to throw away my I Love New York carrying bag now that queers can get married there.” Daniels has since removed the status update, but that hasn’t discouraged a group of Troy High School students from organizing a protest Monday afternoon and night calling for her resignation.

You can check the original comment for yourself, as well as Daniels’ little poem about Anthony Weiner: 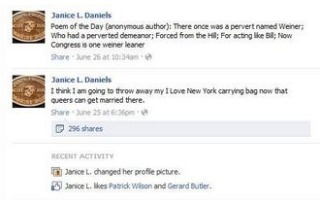 “I may have said something like that,” Daniels said earlier this month. She added that, although she believes marriage should be between a man and a woman, she has nothing against gay people themselves. “I love all people. I am human. That was probably a poor choice of words.”

Gay-focused blog Queerty points out that Daniels had also attempted to explain her original comment by noting that she had not been considering a run for office when she wrote it: “I was not even considering running for mayor when I posted that,” she said. “I probably shouldn’t have used that kind of language, but… I was thinking for myself.”

Oh, and in case you were wondering: “BTW, I am still carrying my I Love New York bag.”