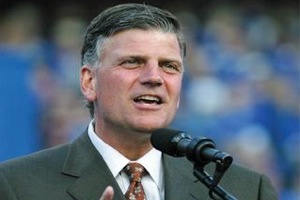 The American Family Association’s Bryan Fischer wrote on the association’s blog that the decision to rescind Rev. Franklin Graham‘s invitation to speak at the National Day of Prayer was proof that the fundamentalist Muslims and gay rights groups had successfully conspired to take over the US military. Who would have thought those two groups could get along well enough to infiltrate and control the most powerful military in the world?

Media Matters dug up this quote from Fischer’s blog post, which is a conclusion derived from Fischer’s attempt to prove that Graham’s opinion of Islam is correct (h/t Towleroad):

Bottom line: you want to know who’s now running the U.S. Army, the U.S. Navy and the Marines and calling the shots where it counts? Fundamentalist Muslims and homosexual activists.

The AFA has built a reputation for anti-gay, anti-semetic, anti-muslim… anti-many-things activism, and while normally these kinds of claims would rarely receive any coverage, the AFA receives sizable funding and boasts an extraordinary number of members considering comments like the one above. And– although by its own account— it is quite influential. It’s a bit unclear why the “homosexual activists” were tossed in there given that the topic was the alleged censorship of an anti-Muslim religious figure and Islam is considered somewhat less accepting of homosexuality than other religions, but no matter, Fischer says they are working together to destroy the country and make it a gay Muslim paradise.