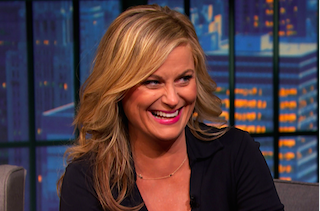 Amy Poehler may have been at the top of many people’s lists as a potential replacement for Jon Stewart on The Daily Show. But according to an anonymous source quoted in The New York Times Magazine’s new sprawling article about the future of Comedy Central, she could not have been less interested in taking the gig.

After the network reportedly reached out to gauge her interest, “They were pretty much expecting her to say no,” the source said, “and it was the quickest no in history.”

Another unlikely big name that got thrown around was Chris Rock. And while he was more open to the idea than Poehler was, he apparently only wanted the job through the 2016 election, after which time the show would have had to put in a more permanent host.

In the end, Kent Alterman, president of content and original programming at Comedy Central, told NYT Magazine’s Jonah Weiner that Trevor Noah was an early favorite of Stewart’s and was “the only person we made an offer to.”

During an event last week, Comedy Central parent company Viacom entertainment president Doug Herzog admitted that no one at the network vetted Noah’s Twitter account before hiring him, a fact that became apparent when a several borderline-offensive tweets came under scrutiny. “But the truth is even had we looked at it I don’t know what we would have done differently,” Herzog added.