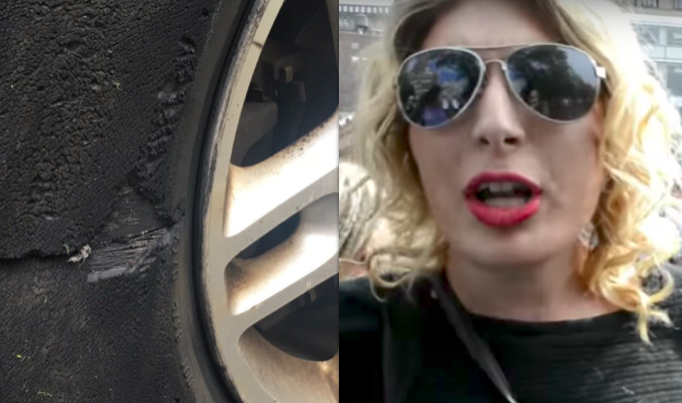 Laura Loomer — the fierce MAGA-warrior who rose to memeworthy prominence when she bravely crashed a performance of the Trump-themed Shakespeare in the Park — made headlines in right-wing media last night after taking to Twitter to allege someone had slashed her tires:

Someone just slashed my tire… I’m honestly speechless. 1 week after someone doxed me. pic.twitter.com/A8HwyHdt7W

If true, the allegations would be troubling: it would mean that the young woman, who once took to Wall Street to put a burqa on the Fearless Girl™, was being targeted by one of her many enemies.

But there was one problem with Loomer’s story, and many tire-savvy commentators on Twitter were quick to point out that her “rotten” tire bears all the hallmarks of an old piece of rubber.

One user, who goes by Mike (disclaimer: there is no indication Mike has any idea what he’s talking about, but he seems to have a Good Will Hunting-esque command of tire-facts), informed Loomer that the marks on her tire are indicative of “an impact blow out”:

The mark there, is where the wheel hit a curb / pot hole.
There is ZERO puncture. That’s an impact blow out.
The tire is old. pic.twitter.com/0qIH8Ggvl3

If you want to learn about tires today, you can read Mike’s entire thread here.

And for those who consider Mike to be an unreliable source, the official Michelin USA account assessed the damage, positing that it “looks like the tire is severely cracked”:

It’s hard to say what could have happened here. It looks like the tire is severely cracked. We’d recommend a tire inspection.

In response to the onslaught, Loomer sent out a message to those refusing to stand with her: “I’m not going to defend people I disagree w/ when they won’t defend me and my tire,” she wrote, defiantly.

As some have pointed out, this wouldn’t be the first time Loomer pulled an absurd stunt to generate publicity. In 2015, she was suspended from Barry University after she tried to start a pro-ISIS Club, with the help of Project Veritas’ James O’Keefe.

Loomer’s latest allegations, regarding her tire, ignited a meme-fest that’s has lasted well into Thursday:

Someone just slashed my tire… I’m honestly speechless. 1 week after someone doxed me. pic.twitter.com/JilVDDrKvH

Don’t listen to ’em Laura. Same thing happened to me & someone planted a tree in my car. Yesterday she was mint, just had her serviced. pic.twitter.com/T9V96moXAO

Mine too..the libs will stop at nothing Laura pic.twitter.com/TKGjhqcdeI

Someone just slashed my tire… I’m honestly speechless. 1 week after someone doxed me. pic.twitter.com/Nf1tLJNgkc

Weird that someone would slash a tire you apparently found on the bottom of a quarry lake and put on your car for some reason https://t.co/bAPgMvTrAR