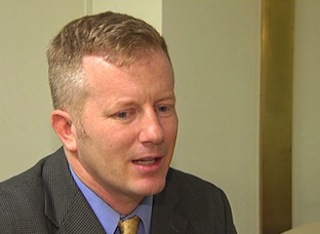 Hey, have you guys heard of Stacey Campfield? He’s a Senator from Tennessee and a totally fun guy. Previously, he’s done fun things like claiming only gays spread AIDS and sponsoring the so-called “Don’t Say Gay” Bill which tried to stop schools from even mentioning homosexuality for fear that the very words will turn kids gay (which is ridiculous because, if there’s anyone who knows that words aren’t magic, it’s a guy who spent his whole life with a girl’s name). Anyway, shockingly enough, some people don’t like him. He learned this the hard way when he tried to eat at a Knoxville restaurant only to be kicked out and banned for life.

“Martha Boggs, owner of the Bistro at the Bijou, said she ordered the controversial Republican legislator out of her restaurant Sunday in disgust over his recent remarks about the origin of AIDS.

‘He’s gone from being stupid to dangerous,’ Boggs said today. ‘It’s just my way of standing up to a bully.’

‘He didn’t have much to say,’ Boggs said. ‘He left graciously.'”

The restaurant later posted a status update on their Facebook page reading “I hope that Stacy Campfield now knows what if feels like to be unfairly discrimanted against.” It currently has 2,244 “like’s”.

I’m not sure what Campfield was thinking. What was he expecting to happen when he went to a restaurant that is literally located on South Gay Street. I’m not joking. That’s the address.