Atheist Sam Harris: Affleck Was ‘Hostile,’ ‘Gunning for Me’ in Maher Debate 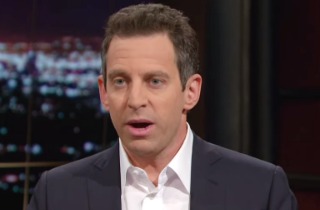 When Bill Maher fought Ben Affleck over Islam last week, Maher was joined by atheist Sam Harris, who called Islam “the motherlode of bad ideas.” And in a follow-up blog post on that heated debate, Harris writes that he was “thrown a little by Affleck’s animosity.”

Yes, Harris found it odd that the acclaimed actor was “gunning for me from the start,” when they had never met before. He suspects that Affleck may have been coached by “a fan of Glenn Greenwald” who told him Harris was “a racist and a warmonger.” But for whatever reason, Harris writes, Affleck was rude and abrasive and “pretty hostile.”

And as for Affleck telling him his criticism of Islam is just racist and akin to calling Jews “shifty,” Harris has this rebuttal:

The most controversial thing I said was: “We have to be able to criticize bad ideas, and Islam is the Mother lode of bad ideas.” This statement has been met with countless charges of “bigotry” and “racism” online and in the media. But imagine that the year is 1970, and I said: “Communism is the Mother lode of bad ideas.” How reasonable would it be to attack me as a “racist” or as someone who harbors an irrational hatred of Russians, Ukrainians, Chinese, etc. This is precisely the situation I am in. My criticism of Islam is a criticism of beliefs and their consequences—but my fellow liberals reflexively view it as an expression of intolerance toward people.

Harris charges that Affleck, Nicholas Kristof, and others get their arguments not from stats and polls, but from “the feeling that they get from the dozens of Muslims they have known personally.” He does say that they most likely mean well, but liberals who are so quick to defend the Muslim faith “refuse to accept the abundant evidence that vast numbers of Muslims believe dangerous things about infidels, apostasy, blasphemy, jihad, and martyrdom.”

And you can watch that now-infamous debate here, via HBO: