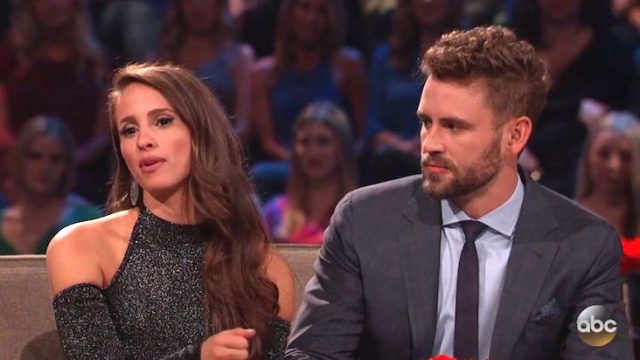 Bachelor Nation, much like our nation, is divided. The outcome of the recent season that ended in Nick Viall getting down on one knee and proposing to Vanessa Grimaldi was disappointing to lots of people who had fallen in love with Raven Gates and wanted to see her get the final rose.

On last night’s After the Final Rose special, Nick and Vanessa were…awkward together. They spent a lot of time talking about how hard things have been after the show and seemed to be uncomfortable around each other, which is probably to be expected when two people who have known each other for only a few months get engaged on a TV show.

Former contestants had a lot to say:

I am always hopeful for happy endings, especially when it comes to my #bachelornation family, but @VanessaGrimaldi doesn’t seem happy? ?

What’s the winner going to do with her time this summer while nick is filming BIP? #TheBachelorFinale

This is so real it’s kinda depressing. #TheBachelorFinale

Wtf is going on? This is all making me very uncomfortable. #thebachelorette #fakenews?

Reality Steve, king of The Bachelor blogging and spoilers weighed in:

Nick and Vanessa’s relationship summed up in one picture pic.twitter.com/oYEZpu7RlR

And, lots of Bachelor Nation seemed to agree.

The rest of America rn…
pic.twitter.com/qafe24RQhe

Me watching Nick and Vanessa trying to conivce america that they’re a solid couple #TheBachelorFinale pic.twitter.com/GYN6mvpyhY

There was also this, because of course there was:

Of course, everything is heightened and awkward in a TV setting, which pretty much every couple to come out of The Bachelor franchise seems to admit, including Nick and Vanessa last night. Now, their relationship actually starts.