Bachmann: American Jews Have ‘Sold Out Israel’ by Supporting Obama 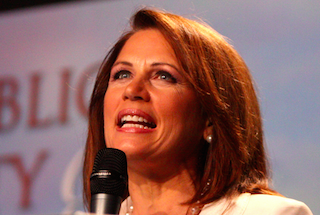 During an interview with Tony Perkins of the Christian conservative organization Family Research Council Monday, Rep. Michele Bachmann (R-MN) expressed her dismay over the way Jewish people in America have embraced President Barack Obama. By doing so, she said, “they sold out Israel.”

Once again invoking the biblical End Times prophecy, Bachmann questioned Obama’s dedication to one of our greatest allies. “I just believe that as believers in Jesus Christ who see the authority of scripture, I believe that the Lord and his strong right arm will have Israel’s back and will be her protector,” Bachmann said. “The question is, will we as the United States cooperate in standing with Israel and blessing Israel, or will we join those nations that come against her?” She added, “We are definitely on the wrong side. It is jaw dropping, it is stunning, it’s breathtaking.”

While Obama “made promises that he would have Israel’s back,” Bachmann does not see him following through on them. That’s what makes it so hard for her to believe that American Jews have stuck with him. “The Jewish community gave him their votes, their support, their financial support and as recently as last week, forty-eight Jewish donors who are big contributors to the president wrote a letter to the Democrat senators in the U.S. Senate to tell them to not advance sanctions against Iran,” she said. “This is clearly against Israel’s best interest.”

“What has been shocking has been seeing and observing Jewish organizations who it appears have made it their priority to support the political priority and the political ambitions of the president over the best interests of Israel,” Bachmann continued. “They sold out Israel.”

Listen to audio below, as clipped by RWW: