Bachmann Hypocritically Goes After ‘Cult of Suicide’ Islam for Being Intolerant 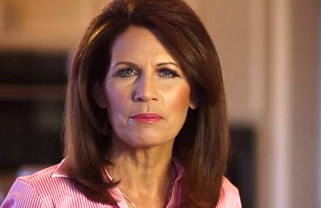 Just as Patheos allows Bristol Palin to blog on their domain, World Net Daily has given Michele Bachmann a similar platform from which to address the masses. It’s a rock upon which she can build her house, if you will. If you are not familiar with WND, the top headline on their front page is an all-caps’d “DOCTORS LEAVE CRYING BABY UNATTENDED TO DIE.” Clicking that brings readers to an unsubstantiated story about a failed abortion in Warsaw. None of the people cited in the article as spokespeople for the hospital come up in any Google searches and the only other sites with the story are anti-abortion campaigns. Similarly, when one clicks the next article, “Dawkins Becomes a Creationist,” they are redirected to Creation Moments, where a woman named Karen E. Dawkins has posted about the factual inaccuracies of evolution.

Obviously, sensational headlines and emphatic narration are a key part of what WND does, so adding Bachmann and her unique brand of fiery rhetoric are a natural choice for their editors to make. She is especially vehement about Biblical teachings and their practical application in modern society as well as her unabashed disdain for the Middle East. Thus, her column today at WND, titled “OBAMA ENJOYS CUBA WHILE CIVILIZATION BURNS” and tagged under “GLOBAL JIHAD,” was born.

Here are a few of the highlights.

She mourned that Europeans are now more disinterested than ever in their former Christendom, and warned this:

Nuclear jihad is the world’s next phase as the Iranians illegally fires [sic] ballistic missiles and covers [sic] their tracks at obviously working nuclear sites.

Also, she suggested the Christian God is punishing Obama for not handling ISIS how she thinks he should by having ISIS kill more innocents:

Or maybe our president’s humiliation comes in a manner so devastating it makes one wonder whether the Creator of humankind isn’t reminding this world of the inferiority of foolishness in the face of wisdom.

She revealed that she believes Jesus’ death can be mapped right down to the day:

This week, some 2,000 years ago, a Jewish Savior named Jesus willingly gave His life as a substitutionary sacrifice to pay for the sins of all humankind, to reconnect us with the God who made us.

She ended by called Islam a “cult of suicide” and then completely dismissed peace as an idea worth holding out hope for:

Meanwhile, first responders in Brussels must bear the burden of cleaning up the consequences of the ill-fated decisions of Angela Merkel, Barack Obama and other ideological merchants who traffic in the dangerous fantasy of multicultural diversity, globalization and one-world nonsense.

What she failed to grasp in her furious tirade against President Obama finishing out the planned activities of his monumental, Cold War-ending trip to Cuba by attending a baseball game, is that she is as doggedly dedicated to division and the trouncing of nonbelievers as any ISIS fighter. She wrote that we are embroiled in “a conflict the enemy has dedicated his life to win” and then segued into her own refusal to strive for diversity and peace.

Finally, note that while she scorned Islamic devotees for dedicating their lives to their cause, she has gone on record expressing her joy at living in what she believes are the “end times” because she knows that soon the world will end. She said, “The prophets longed to live in this day that you and I are privileged to live in!”

Interestingly, in spite of how Bachmann’s column fits in seamlessly with the rest of the site’s content, the comments on the article itself are all impassioned defenses of Obama’s trip to the baseball game.