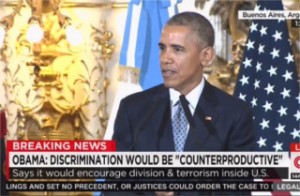 “My top priority is to defeat ISIL and to eliminate the scourge of this barbaric terrorism that’s been taking place all around the world,” Obama said. He noted that in addition to “high-profile attacks in Europe,” there were more atrocities taking place in the Middle East on a regular basis.


It was vitally important, he said, to pursue ISIS “in an intelligent way.” He defended his administration’s approach — which he described as a strategy of continuing airstrikes against leadership, targeting their infrastructure and financials to disrupt their organization, drive them from strongholds, seize their territory, and ultimately destroy them.

“What we don’t do — and what we should not do — is take approaches that are going to be counterproductive. So when I hear somebody say we should carpet bomb Iraq or Syria, not only is that inhumane, not only is that contrary to our values, but that would likely be an extraordinary mechanism for ISIL to create more people willing to die and explode bombs in an airport or in a metro station. That’s not a smart strategy,” he said.

The comments seemed to be a direct rebuke to Sen. Cruz, who has proclaimed his intention to carpet bomb the organization, a vow he reiterated after the Brussels attacks.

As far as what some candidates have said, I think I’ve been very clear on this. One of the great strengths of the United States and part of the reason we have not seen more attacks on the United States. We have an extraordinarily successful, patriotic, integrated Muslim-American community. They do not feel ghetto-ized. They do not feel isolated. Their children are our children’s friends, going to the same schools. They are our colleagues in our workplaces. They’re our men and women in uniform, fighting for our freedom. And so any approach that would single them out or target them for discrimination is not only wrong and un-American, but it would also be counter-productive. Because it would reduce the strength, the anti-bodies that we have to resist terrorism. As far as the notion of having surveillance of neighborhoods where Muslims are present, I just left a country that engages in that kind of neighborhood surveillance. Which, by the way, the father of Senator Cruz escaped for America, the land of the free. The notion that we would start down that slippery slope makes absolutely no sense.