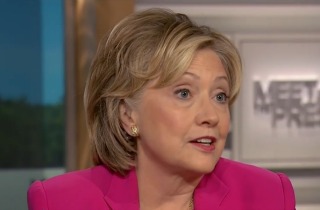 The House Select Committee on Benghazi announced on Thursday that it intends to release more of Hillary Clinton‘s email correspondence regarding Libya and the 2012 Benghazi attack.

According to committee Chairman Trey Gowdy (R-SC), the emails show that Clinton, the frontrunner for the Democratic presidential nomination and the secretary of state at the time of the attack, helped advance a former close confidante’s business interests in Libya. Gowdy also claimed the State Department had withheld those messages from the committee for almost a year.

The emails between Clinton and that former confidante, Sidney Blumenthal, contain strong criticisms of President Barack Obama and his administration’s policy toward Libya, the committee said, adding that Blumenthal “was actively promoting U.S. military engagement in Libya.” In a set of emails disclosed in September, Blumenthal called House Speaker John Boehner “lazy” and an “alcoholic.”

“It is curious Secretary Clinton took so much of her advice from someone who had never been to Libya, professed no independent knowledge of the country and who the White House blocked her from hiring,” Gowdy said. “Any one of those should have been a red flag, but instead, she continued to solicit Blumenthal for advice.”

Blumenthal testified in front of the committee in June. Democrats have pushed Gowdy to release the transcript of that interview, but Republicans have not obliged. Doing so, they said, would compromise the integrity of the investigation, and they believe that today’s revelation reinforces that decision due to “the possibility of new investigatory information being discovered.”

In a 13-page letter to Rep. Elijah Cummings (D-MD), the committee’s ranking member, Gowdy accused Cummings and other Democrats of engaging in “partisan bickering” and attempting to sabotage the committee’s investigation.

“For months you have done nothing but write letters dripping with vitriol and baseless allegations, driven, one would reluctantly conclude, by the desire to create a false partisan narrative,” Gowdy wrote. “Your Democrat colleagues and you have contributed nothing substantively to the committee’s investigation over the past seventeen months.”

The move comes three days after Democrats on the committee began releasing transcripts of interviews the panel conducted with various witnesses, including Cheryl Mills, Clinton’s former chief of staff, in order to “correct” Clinton’s public record and “previously debunked allegations.”

In his letter, Gowdy said he was “disheartened at the nature and tone” of Cummings’ announcement on Monday, which Democrats said was in response to House Majority Leader Kevin McCarthy‘s comments connecting the committee’s work to Clinton’s falling poll numbers. Democrats viewed those remarks as an admission and a reinforcement of their long-standing criticism of Republicans — that they created the committee last year with the intention of damaging Clinton’s presidential bid, not to investigate the Benghazi attack.

McCarthy later sought to clarify himself, but the damage might have already been done. Many political observers said Thursday that those comments cost McCarthy the House Speaker job, as he unexpectedly dropped out of the race for the top post in the lower chamber.

Gowdy said he would not comment on the Democrats’ disclosure of Mills’ interview transcript and other documents, adding that they “bear full responsibility for any consequences flowing from such an improper release.” Cummings had given Gowdy five days from Monday to inform Democratic staff of any excerpts that they believe should be redacted.

Clinton is set to appear before the committee on October 22. Democrats attempted to dismantle the Benghazi committee this week, but those efforts failed on a party-line vote.