Best Speech Yet or Rambling Lies? Twitter Is Split on Trump’s Anti-Hillary Speech 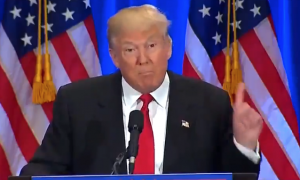 Donald Trump gave a speech attacking Hillary Clinton today, and it might have been one of his strongest, most on-message presentations he’s ever had. Of course, it was bound to attract attention on Twitter, and his speech seems to have cut relatively down the middle with people.

The former Secretary of State attacked the mogul’s business record yesterday, and he responded by ripping her economics plan, her foreign policy record, and generally painting her as the most “corrupt” lying candidate to get so close to the presidency.

Trump got some mixed reactions. Several conservatives, even those in the #NeverTrump camp, seemed to have a positive reaction to the speech:

That is the whole election, right there!https://t.co/k7Pzy8xVRC

If Teleprompter Trump were real Trump — we’d have had two good speeches (Orlando, Hillary) making headlines, rather than ancillary garbage.

This is mix of true, devastating anti-Clinton critiques with overstatement, incoherence & hypocrisy.

Yeah, this is the best speech Trump has given in the campaign so far. But can he keep it up?

This attack style of @realDonaldTrump on @HillaryClinton if he can be consistent might work well!

Others, however, were not so favorable:

This is one of Trump’s best campaign speeches so far. Of course, he’ll probably close by accusing Hillary Clinton of being a secret Muslim.

It’s true that Trump can’t be blackmailed, because he is incapable of shame.

Donald Trump is now criticizing someone else for being “volcanic, impulsive…disdainful of the rules set for everyone else”

Trump talks like he’s speaking to someone who barely understands English.

“A lot of what [Trump] just said is flatly not true.” –@mitchellreports on @MSNBC just now

I need Trump to learn breath control. All that inhaling into the mic gives the sense he choking for air.

Trump says Brian Williams career was destroyed for lying. I bet this is awkward for the person covering it: pic.twitter.com/1stTydKyvt

In the end, Ben Shapiro reminded everyone that people who say Trump’s more disciplined persona is imminent shouldn’t get over-excited just yet:

Prediction: Within 24 hours, Trump will have said something to knock his good speech off the front page.