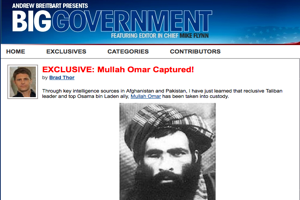 Early yesterday evening, the biggest victory in the Afghanistan War quietly slinked onto the internet– brought to you by the site made famous for sending a fake pimp and prostitute to expose ACORN’s alleged ties to child sex trafficking. Big Government exclusively broke the news that Taliban leader and close Osama bin Laden ally Mullah Mohammed Omar had been captured by Pakistani authorities, but with no further evidence than the words of “key intelligence sources,” they’re going to have to do a better job of convincing the media that the story is true.

According to Big Government‘s Brad Thor:

At the end of March, US Military Intelligence was informed by US operatives working in the Af/Pak theater on behalf of the D.O.D. that Omar had been detained by Pakistani authorities. One would assume that this would be passed up the chain and that the Secretary of Defense would have been alerted immediately. From what I am hearing, that may not have been the case.

When this explosive information was quietly confirmed to United States Intelligence ten days ago by Pakistani authorities, it appeared to take the Defense Department by surprise. No one, though, is going to be more surprised than Secretary of State Hillary Clinton. It seems even with confirmation from the Pakistanis themselves, she was never brought up to speed.

Today, as a reinforcement of yesterday’s report, Big Government ran a column by Jed Babbin analyzing the repercussions of having someone like Omar in custody, and warning that an interrogation on the part of the American government would be detrimental because he “would be Mirandized and pushed into the civilian criminal justice system where he, and his ilk, manifestly don’t belong.”

Unlike the type of reports Big Government and it’s sister sites specialize in, there was no undercover James O’Keefe, pimping his way into a secret cache of Pakistani intelligence. There was no video evidence of Taliban members throwing eggs at a Tea Party bus. There really isn’t any sourcing, either, other than unidentified “key intelligence sources.” The story and its style deviate significantly from what the Big sites usually do. Unsurprisingly, Big Government isn’t getting much support from the mainstream media. In fact, even among default allies like RedState and Hot Air, there seems to be a level of skepticism. RedState reported it with a question mark and made sure to point out Thor’s credentials as a “best-selling novelist.”

Allahpundit at Hot Air went through a list of reasons to believe the story— namely that Secretary of State Hillary Clinton had commented that she believed Pakistani authorities had information on the Taliban they were refusing to share— and reasons not to believe the story (“how come this hasn’t leaked? Nothing against Brad Thor, but this is so tippy top secret that he knows about it when the NYT, WaPo, and even Hillary Clinton don’t?”). Marc Ambinder at The Atlantic also reported it with extreme skepticism, but other than these sites, no one seems to have picked the story up.

Reporting the story is a peculiar decision to make on the part of the Big sites (Big Journalism ran it, too), as they usually stay away from major foreign policy journalism. Not to mention that by Brad Thor breaking it, he is putting professional provocateur Andrew Breitbart‘s reputation at risk, as well. Breitbart’s sites have rarely broken a story without video evidence, and the Big sites usually shy away from news from outside the US, with the exceptions of denouncing Che Guevara‘s war crimes or updates on Hugo Chavez‘s crackdown on the Venezuelan media. If he’s right, Breitbart will have branched out as a legitmate source on military intelligence and beaten all of the mainstream media to the punch; if he’s not, he just gave all of the media– not just his enemies– carte blanche to ignore anything and everything he says, a risk that doesn’t seem to be worth the short-term increase in web traffic.