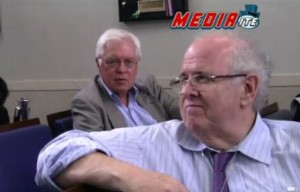 Before today’s White House daily briefing, I spoke to several reporters from conservative publications about the chatter surrounding a potential Chris Christie presidential run. They each shared their thoughts on why it is that Christie won’t run, so I thought I’d also get a liberal perspective from my Professional Left colleague, Bill Press. While he agreed with our conservative friends, his reasoning was comically succinct: “He’s too fat!”

While Press was obviously joking, Audio-Video News’ Connie Lawn (currently, the most senior reporter in the White House) said, “That’s a good point, because he’s not physically fit, any more than John McCain was,” adding, “in the days of Theodore Roosevelt, they could get away with it, but that doesn’t fly anymore.”

Opponents of Sen. John McCain raised questions about his health during the 2008 campaign, part of a general narrative about his age, but at the time, I never saw such concerns as genuine. Agree with him or not, McCain’s a survivor, and he’s still going strong. That’s not to say that I never made a “Get off my lawn!” joke, but the concern expressed by others about his ability to survive four years in office, I never found legitimate.

The same holds true for Chris Christie, I think. As a fellow Jersey boy who’s miles ahead of Christie in the race to the grave, despite being several years younger, I better damn well hope we both have at least four more years in us.

Here’s the clip, from before today’s White House briefing: