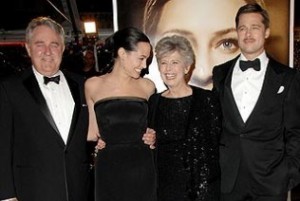 You may recall that Brad Pitt‘s mother, Jane Pitt, made headlines recently for writing a letter in response to a the Springfield News-Leader editorial. In the letter, Mrs. Pitt voiced her support for Mitt Romney despite the op-ed’s qualms about his Mormon faith, adding that any Christian “who does not vote or writes in a name is casting a vote for Romney’s opponent, Barack Hussein Obama — a man who sat in Jeremiah Wright’s church for years, did not hold a public ceremony to mark the National Day of Prayer, and is a liberal who supports the killing of unborn babies and same-sex marriage.”

Now, Mrs. Pitt is receiving a barrage of taunts and death threats over her letter. As Twitchy (which has compiled a list of Tweets regarding Pitt’s letter) notes, some online are advocating that the actor’s mother “eat a dick” (among other genitalia) for her comments, with others calling for her to be killed.

WND.com, meanwhile, reports that Mrs. Pitt “has been scared into silence by the hate-filled, vulgar and even violent reaction” to her letter:

WND spoke briefly with Pitt and asked about the media assault against her for her comments as a private citizen supporting Romney. With inflections in her voice that conveyed fear and despair, she quietly and politely said she was not interested in talking to anyone in the media about the incident.

When she was told WND supported her right to speak her mind and is appalled by the threats against her life, Pitt expressed gratitude to WND for being one of the few news agencies doing so. Even her thank you, however, was said in a subdued manner laden with heaviness of heart.

The report adds that she “had every reason to be frightened.”

As someone who has written online for a few years now (particularly on a site with political and politicized content), I can offer some insight on this: Mrs. Pitt, you really don’t need to be afraid. Disturbed over the response? Disappointed? Disgusted? Sure. But to lend credibility to people who somehow didn’t get the memo that it’s perfectly ok to be offended (And it really is! It’s ok! Let your offense warm you and sustain you, people, instead of flailing it around on the internet. You wouldn’t want it to unravel before you can use it.) by acting as if words written in anger or frustration hold any real power? It’s not worth it. These people are venting. But, by writing a letter about a contentious matter meant for a wide-ranging audience, you’ve entered into a contract of sorts. You get to express your point of view, people get to love it, hate it, or inundate comment threads with plaintive wails of “WHO CARES!”

Mrs. Pitt’s case is an interesting one precisely because it provides several examples of how to deal with offending others and feeling offended, with neither side being able to claim to come out with their hands completely clean. Mrs. Pitt’s letter does indeed stand to offend. She makes a point of using the President’s middle name — and, whatever your thoughts on Obama, I think we can all agree that when people bring up the name “Hussein,” it’s for a very specific and calculated reason — and paints same-sex marriage as a negative, something to be avoided. And, as someone who is constantly frustrated and disappointed by the speculation, gossip, and misinformation spread about both Romney and Obama’s faiths, I know that Mrs. Pitt’s letter is detrimental to serious, intelligent debate. To lift up one candidate by putting down another might be a widely-practiced (and, as we’ve seen every campaign season, highly effective) tactic, but it doesn’t elevate the discussion. And if someone is going to go ahead and slip down into the muck, it’s not exactly surprising that she’ll get muddy.

So don’t worry, Mrs. Pitt. The people who wish you harm, the people who hurl sexist slurs your way are either ill-equipped or uninterested in engaging in a serious discussion. They either delight in being offended, or feel incensed because they somehow feel they should be immune to being offended or facing disagreement. But they won’t do anything more than talk. The only way to rise above this, though, is to look at oneself, read over one’s own arguments and wonder “How can I do better?” and, more importantly, “How am I not doing better?”