Trump Rally Postponed as Protesters Infiltrate and Fights Break Out 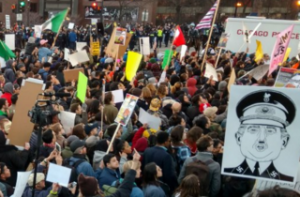 Over 50,000 people signed a petition to get Donald Trump‘s rally at the University of Chicago canceled and they sort of got their wish. Trump just canceled his rally over “security concerns” because there are too many fights breaking out as protesters infiltrate the pavilion.

The fights are not altogether out of the ordinary, as Trump’s rallies have become increasingly violent, especially toward protesters and journalists.

Here is video from CNN of the moment the announcement came out. Note the protesters and the fights:

The people of Chicago don’t seem to like Trump… pic.twitter.com/624Q20mQHG

Trump supporters leaving UIC after he canceled are on the left and protestors are on the right pic.twitter.com/HiehdUP3EI

Protester on stage at the Trump rally in Chicago, no audio. Trump just canceled the event https://t.co/NRenMG3051 pic.twitter.com/TofTqUHOkK

Basically the 5 bottom sections of the stands in this shot are filled with protesters: pic.twitter.com/h6bXnSNQPM

This is a breaking post that will be updated as details become available.

Statement from the Trump campaign:

Mr. Trump just arrived in Chicago and after meeting with law enforcement has determined that for the safety of all of the tens of thousands of people that have gathered in and around the arena, tonight’s rally will be postponed to another date. Thank you very much for your attendance and please go in peace.

Here is a live stream courtesy of NBC Chicago:

More video from the announcement of the cancelation: