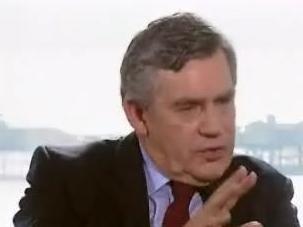 British Prime Minister Gordon Brown was hit with a stunning question on BBC’s Sunday morning show about whether he uses prescription painkillers.

The question, and fall-out, has become a huge story overseas, as supporters question why the tabloid-like topic was approached during the interview.

Andrew Marr, who is as close to an unbiased, Tim Russert-like force in the British media, asked Brown the question after apparently it had become a major topic in the country and blogosphere. “Something everybody has been talking about in the Westminster village,” said Marr. “A lot of people in this country use prescription painkillers and pills to help them get through. Are you one of those people?”

“No,” said Brown quickly. “I think this is the sort of questioning which is all too often entering the lexicon of British politics.”

The anonymous sources were out in force, with one Labour party source telling the Telegraph, “No one can believe the BBC, in its flagship programme and the most important political interview at Labour conference, would stoop to this. It was astonishing. No one can quite work out their motivation.”

The background here is that Brown has had some public medical problems with his eyesight, and has been through several surgeries that have kept him from going blind entirely. Still, he denies the accusation.

What would this be the equivalent to in America? David Gregory asking Pres. Barack Obama about his birth certificate?

One more fun note, that only a British political story can provide – Brown’s Sec. of State defended his boss against an opponent, David Cameron, by calling him a “flibbertigibbet” (we Google’d it for you).