Can The GOP Keep The Obama Scandals Alive?

Can The GOP Keep The Obama Scandals Alive? 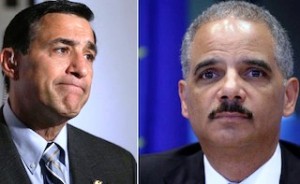 The golden roar of the Obama scandals may whimper to an end today. As Congress adjourns for Memorial Day recess, a ten-day break from hearings, hearings, and more hearings threatens to push the various controversies out of the public eye, leaving the GOP with an urgent problem: how to maintain intensity over the scandals without any congressional machinery to do so.

For the past few weeks, Representative Darrell Issa, Chairman of the House Oversight and Government Reform Committee and owner of one of Twitter’s best avatars, has thrown a wide cast of witnesses before the camera, treating the nation to constant roll of embattled Eric Holder and slippery IRS officials and Lois Lerner invoking some amendment well below the second.

Issa’s hearings have been of mixed usefulness: excruciating in the instance of the already-litigated Benghazi affair, somewhat revelatory in the cases of the IRS and AP stories.

More to the point, they have been crucial in keeping every storyline running. Even when the performances didn’t play out the way Issa intended—as when Eric Holder schooled the room on the decorum—they ensured the news coverage remained focused on the alleged dirty deeds of the Obama Administration as opposed to, say, the rapidly shrinking deficit.

But it’s questionable how far any of these narratives can go without Issa’s hearings acting as their engine. As Politico notes, with some despair, the IRS story appears to have run its course. “Congress has hauled virtually every conceivable witness before several committees to testify on their role in the debacle,” Politico wrote, and while everybody got film of themselves beating up on IRS agents for future campaign spots, no link to the White House was established.

Issa is hoping to revive the controversy after the break by recalling Lois Lerner to testify. He may be able to argue that Lerner’s opening statement counts as testimony and thus waves her ability to invoke the Fifth Amendment.

Either way, Republican legislators must fan the flames over the break. “Lawmakers say that holding events at home will be unnecessary,” The Hill writes. “In fact, constituents are so energized, members say, that they expect to be approached throughout their districts or states.”

But the GOP has questionable incentives to keep these scandals alive. According to a recent Washington Post poll, while a majority of respondents believe both the AP and IRS stories deserve further investigation, they have yet to blame Obama for any of it—and an overwhelming number emphatically feel that the GOP is focusing on the wrong issues.

The problem is the Republicans don’t have any other issues. A small Tea Party contingent in the Senate is dedicated to blocking even negotiations over the budget, while the more radical flank of the House is gearing up for a pointless battle over the debt ceiling—for which they will have to battle their own Speaker. As conservative scribe Ramesh Ponnuru bluntly put it, the void where Republican policy should be is driving these scandals as much as their bloodlust is. The GOP needs these narratives, because they don’t have anything else to talk about.

Which means at least one if not all of these scandals will survive past the Memorial Break. But as the tap of new information increasingly runs dry, the villains of the scandals may start to look less like the officials called before Darrell Issa, and more like Darrell Issa himself.