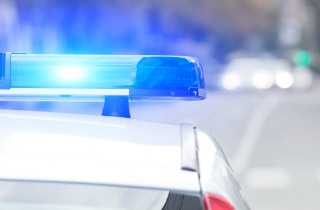 In the latest bit of bad news to dog the Secret Service, New Hampshire police say that four on-duty agents were injured in a car crash last night that left a man dead in the vehicle that collided with theirs.

Reports say that in the town of Wakefield, near the state line of Maine, 45 year old Bruce Danforth was driving a Mercury Sable on the highway when his vehicle crossed the double-yellow line to the opposite lane. At around 7 P.M. his car hit the Ford Taurus that the four agents were traveling in.

Danforth died at the scene, and his two passengers and the agents were taken to local hospitals with serious, but non-life threatening, injuries. Secret Service Director Joseph Clancy confirmed the incident with a statement to NBC News, which also read “please join us as we keep all the victims of this accident and their families in our thoughts and prayers.”

It is not yet certain what operation the agents were working on in New Hampshire, but CBS noted that Hillary Clinton was having a town hall that night at Berlin High School, about 80 miles away from the crash.

UPDATE – 1:04 P.M. EST While Clinton did not clarify that the agents in the crash were part of her detail, Politico reported that she released a statement in condolence for their suffering:

“I was saddened and concerned to hear about the serious accident that occurred last night in New Hampshire in which four Secret Service agents were injured and a passenger in a second car killed…My husband and I send our prayers and condolences to all the victims and their families. We are grateful everyday for the service, dedication, and professionalism of the U.S. Secret Service.”