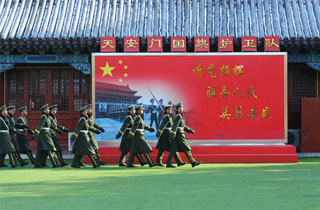 A new edict from China’s State Administration for Press, Publication, Radio, Film and Television has banned the use of wordplay and punnery in the media, citing its apparent corrosive effect on the Chinese language, particularly its idioms. Especially its treasured idioms.

“Idioms are one of the great features of the Chinese language and contain profound cultural heritage and historical resources and great aesthetic, ideological and moral values,” the order states, claiming that “irregular and inaccurate use of the Chinese language” would create “cultural and linguistic chaos.”

While there’s nothing wrong with a good pun now and then, the ban is particularly ridiculous due to China’s longstanding history of punning. As the Guardian notes, puns are practically a 2,000 year-old cultural practice:

When couples marry, people will give them dates and peanuts — a reference to the wish Zaosheng guizi or “May you soon give birth to a son”. The word for dates is also zao and peanuts are huasheng.

The notice cites complaints from viewers, but the examples it gives appear utterly innocuous. In a tourism promotion campaign, tweaking the characters used in the phrase jin shan jin mei – perfection – has turned it into a slogan translated as “Shanxi, a land of splendours”. In another case, replacing a single character in ke bu rong huan has turned “brook no delay” into “coughing must not linger” for a medicine advert.

Then again, the Chinese government may have good reason to worry: dissidents frequently use puns to criticize government policies. (One of the most famous anti-government puns involves a mythical alpaca called the “Grass Mud Horse,” whose name in Chinese is pronounced Cao Ni Ma, or “fuck your mother.” Like we said, they’re good at puns.)