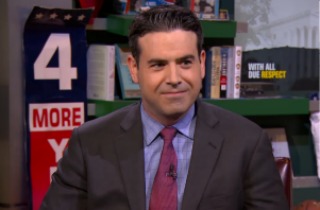 Remember how Hillary Clinton‘s camp had a hissy fit this week and said that they won’t debate with Bernie Sanders anymore if he keeps using negative campaigning against her? Well, according to her press secretary, its seems like that’s no longer the case.

Brian Fallon appeared yesterday on Bloomberg’s With All Due Respect, where he was asked about why their campaign was shying away from a debate in New York before the primary. Fallon said that it was their campaign that requested more debates first and that Sanders was trying to back-channel some more in for his benefit, but he said that Clinton was “perfectly willing” to go another round.

“I think that they’re going to have to work together to figure out dates and locations,” Fallon said, but “if they can find a mutually agreeable date in the next couple of weeks before New York, I think it could happen.”

Sanders has been pressing Clinton to face off with him recently (New York City being one of the considered locations), but Clinton strategist Joel Benenson said on Monday that Sanders should change his campaign’s “tone” before a new debate is considered.

While speculation has grown over Clinton avoiding a New York debate for fear of being attacked over her Wall Street ties, Benenson insisted that the real reason they were upset was because Sanders went negative — after months of saying he would not — by commissioning ads against Clinton.