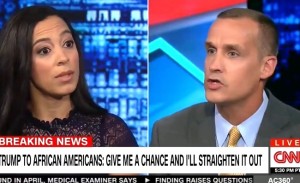 This one featured some old favorites, including Angela Rye, Corey Lewandowski, Kayleigh McEnany, and Tara Setmayer.

Lewandowski pushed back on the idea that Trump made his appeals to voters of colors in front of white audiences because he was really trying to appeal to white people concerned they were voting for a racist. That theory has been mentioned before, so Lewandowski said that he is annoyed no one remembers that when Trump tried to give a speech in front of black people, protests were so brutal that the event was canceled. He and Rye sparred heavily for the majority of the segment over the relevance that event from March has.

When the old talking point of Trump’s lawsuit against a social club that wouldn’t allow black and Jewish people in was brought up, Setmayer let it be known she’d had enough.

“I’m really sick and tired of the Mar-a-Lago thing as a talking point,” she said. “The reason why Donald Trump sued is because he was trying to make changes at that club and the Palm Beach community wasn’t happy with him because he was new money there and they found him ostentatious and obnoxious. So, he used the black and Jewish thing at that club as leverage to get what he wanted in that community. It was not out of the goodness of his own heart! It was for his own purposes.”

Lewandowski tried to defend his former boss, but Setmayer wasn’t having it. She asked for other examples of what Trump had done for people of color and when she didn’t get an immediate answer, Anderson Cooper cut to commercial.