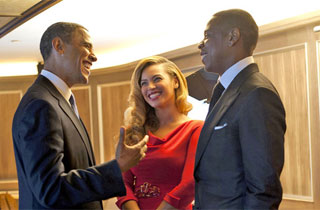 Yesterday during an appearance on Jimmy Kimmel Live! in which the Hillary Clinton email scandal emerged, President Barack Obama revealed that, due to security reasons, he can’t text, email, or use any “newfangled” technology with a recording device.

CNN smelled a conspiracy, or hypocrisy, or someone lying omg:

President Barack Obama and Jay Z may not be as close as they’d like America to think.

The hip-hop legend and business mogul, has previously said “of course” he texts with the president.

But Obama undercut Jay Z’s brag during his appearance on “Jimmy Kimmel Live!” Thursday night, when he told the host he doesn’t text or use a smartphone.

While it’s highly likely that the two aren’t actually BFF — it’s hard to make time for each other, what with the multiple world tours and Obamacare fires to put out — there is still the distinct possibility that Jay Z has, at some point, texted Obama.

Our theory: Obama and Jay Z frequently texted during the 2008 campaign, and then the moment that Obama became president, he could no longer text, which means that Mr. Z’s statement that he “had texts from Obama” makes sense if he was talking about texting in the past tense.

And come on, CNN! There are plenty of ways Jay Z and Obama can communicate! They could have their people call their other people, or use a secure line to communicate over the phone, or, you know, have a face to face conversation with each other. It’s old fashioned, but we hear that interpersonal contact is a good way to maintain relationships between two humans.

UDPATE (10:35 a.m.): At the very least, it appears that Kanye West is lying about calling Obama.

[CNN]
[Image via The White House]