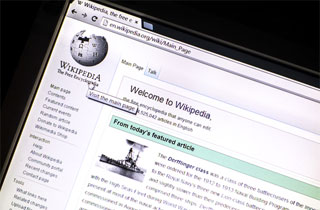 IP addresses from 1 Police Plaza, the address of the New York Police Department’s headquarters, were the source of thousands of Wikipedia edits altering pages critical of the NYPD’s conduct, including the pages of three high-profile cases of police-related deaths. One of those pages was about Eric Garner‘s death.

Capital New York’s extensive report reveals that over the past ten years, anonymous Wikipedia users with NYPD-based IP addresses made “hundreds” of edits to Wikipedia pages, and while many of them were innocuous — one, for instance, made seven changes to an article about the age of consent in Europe, which, gross — a significant number of them made edits to articles describing alleged cases of police brutality.

In one case, a user from the NYPD’s computers attempted to get an article about Sean Bell, an unarmed black man shot multiple times by undercover officers and killed on his wedding day, deleted:

“He [Bell] was in the news for about two months, and now no one except Al Sharpton cares anymore. The police shoot people every day, and times with a lot more than 50 bullets. This incident is more news than notable,” the user wrote on Wikipedia’s internal “Articles for deletion” page.

Notably, soon after a grand jury failed to indict an NYPD officer in the choking death of Garner, the following edits were made to Garner’s Wikipedia page;

● “Garner raised both his arms in the air” was changed to “Garner flailed his arms about as he spoke.”

● The sentence, “Garner, who was considerably larger than any of the officers, continued to struggle with them,” was added to the description of the incident.

● Instances of the word “chokehold” were replaced twice, once to “chokehold or headlock,” and once to “respiratory distress.”

Multiple changes were also made to articles about other high-profile police shootings and policies such as “stop-and-frisk”. In some cases, entire sections from the NYPD’s Wikipedia page, like one titled “Allegations of police misconduct and the Civilian Complaint Review Board (CCRB)”, were deleted altogether.

Wikipedia rules discourages people from making edits based on their own interests, and will, on occasion, ban IP addresses for making edits to their own Wikipedia pages.

An NYPD spokesman said they were looking into the incidences.