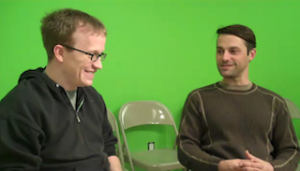 Much has been said about the dangers of cyber bullying and how it affects regular people, but what about those in the public eye? Comedian Chris Gethard recently starred in the Comedy Central series Big Lake. One day, he discovered a post on his IMDB page that was titled “Please Stop Acting” and proceeded to get harsher from there (sample: “The one intelligent career choice you have made thus far is to not have your agent, assuming he hasn’t hung himself, post a picture on your IMDB profile.”). Gethard, who’s become famous in the New York comedy scene for “out of the box” ideas like waging a year-long (and successful!) campaign to get Sean “Diddy” Combs to perform in a “basement theater comedy show,” decided to do something a little interesting. He tracked the commenter down (using self-described “creepy” Google techniques) and brought the guy in for an interview. Yeah, it’s as uncomfortable as you’d expect.

However, the conversation doesn’t go exactly as one would think. Gethard, as always, stays completely affable while, even more amazing, the commenter stands his ground. It seems that the guy (his name is Travis) really doesn’t like Gethard’s work and doesn’t need the anonymity of the Internet to say it.

“GETHARD: When you said [my agent] should have hung herself, that stung because I have some anxiety about career stuff.

TRAVIS: Yeah, I can see that. Well, you’re with a cool crew, like this group and the different comedians that come out of here…

GETHARD: Out of the UCB Theatre?

TRAVIS: Yeah, just different things like that. You’re with a cool crew, you’ve got enough going on. But I can see why you’d be nervous.

GETHARD: Based on that show?

TRAVIS: Not to be a dick again, but just, y’know, comedy. I know a lot of comedians, I’ve read a lot of biographies, autobiographies, and I see it a lot. There’s just that nervousness that you all have. … I don’t want to say it’s ‘pathetic,’ because I that’s so harsh, but I think you’d all say that about yourselves.

TRAVIS: It’s just that neediness thing when you come to the biggest city and try your hardest and you’re average, I’m sure it keeps you up at night.

GETHARD: Yeah, this city will crush you.

TRAVIS: I bake. I bake cookies and bread so there’s not a lot of stress.

GETHARD: Would you say that you are better at baking than I am at acting?

The whole thing is a fascinating look at a number of Internet issues of the day; how comments affect people, how they affect the person typing them, and the things you can discover about someone from just typing in your name. What will be really interesting is seeing if, now that the video’s out there to be commented on, Travis gets to feel the other side of the commenter/commented equation.

Check out the video below: