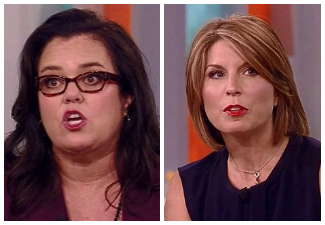 One thing TV execs aren’t very accomplished at — or are too risk-adverse to attempt — is out-of-the-box thinking when it comes to casting a program. The general thought process in making a decision around who gets a coveted on-air spot and who doesn’t is invariably based on that candidate’s existing brand.

So when it came time to replace David Gregory on Meet the Press, NBC took the safest route by going with Chuck Todd, who by all accounts was the next-in-line guy in the same manner it was Bob Dole‘s turn in ’96, John Kerry‘s in ’04, John McCain‘s turn in ’08 or Hillary Clinton‘s in 2016 on the nomination front.

So when it also came time for ABC’s The View to do an almost-complete makeover, the show decided to hold live auditions–known as a bake-off in the business–and make a decision from there. But the bake-off was a meal decided on long before the menu arrived at the table: Rosie O’Donnell was always going to get her seat at the table back. Rosie Perez and Nicolle Wallace were also somewhat-known brands and got the job largely for what each had accomplished in the somewhat near (Wallace as Sarah Palin’s senior advisor) and distant past (Rosie Perez’s memorable supporting role in 1992’s White Men Can’t Jump).

Add it all up, and The View (including its only mainstay from last season’s cast, Whoopi Goldberg) consists of three women in their 50s and one in her 40s. That’s all well and good until considering the show’s biggest challenge is bringing back younger women who used to watch the show, and the way you don’t do that is by signing an All-Star Team from the 1990s and an advisor from an election six years ago.

So what’s been the tangible result as we approach the two-month mark since a big debut that saw the show’s highest ratings in eight years?

Nielsen reports The View is now below the ratings it posted one year ago and nowhere near what it posted five years ago. Via the Hollywood Reporter:

Its (The View) showing in the key demo is pacing downward for the fourth straight season and is 30 percent south of where it was five years ago. It doesn’t help that The View’s advantage over CBS’ The Talk now is negligible. Recent weeks have seen the two shows evenly matched in the two key female demos.

The financial consequence for ABC is what it’s paying O’Donnell to lead a show that is performing worse than its Whoopi-Jenny McCarthy–Sherri Sheperd–Barbara Walters cast of one year ago can be found in another kind of number: Rosie’s contract, which is reported to be $20 million over four years. Yikes.

So who should The View have gone with? My choices months before the final casting was announced was a bit outside the box, but not outlandish: S.E. Cupp or Ann Coulter in the token conservative role (Wallace was my third choice); Sarah Silverman or Sally Kohn in the liberal position (in retrospect, I’d add Alicia Menendez to that list). Robin Quivers replaces Whoopi (Robin was my only choice here, no second option). And your moderator? None other than New York morning drive WFAN co-host Craig Carton–yup, a guy–because he’s a provocative instigator who adds new meaning to the word candid. If Carton balked, going after Katie Couric would help bring some of the gravitas lost (Barbara Walters and Meredith Vieria are two former Today hosts who also hosted the View, so it wouldn’t be a longshot). Couric is currently in the Senior Galaxy Correspondent capacity for Yahoo News (or something along those lines), which likely has her yearning to be relevant again.

In the end, all would be strongly opinionated, uniquely compelling and relatively fresh faces–unlike O’Donnell–who already wore out her welcome during her first go-around with the show ending in 2007.

But in-the-box thinking continues to permeate the corner offices of those who make these kind of decisions.

And programs like Meet the Press and The View are suffering from familiarity breeding contempt (and apathy) as a result.