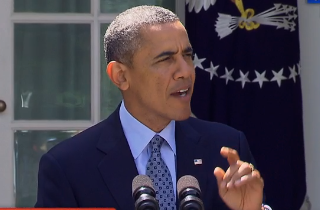 As we celebrate President Barack Obama’s 400th fundraiser since taking office five-and-a-half years ago, it should be noted that of all the thousands of people who have attended, one group has been barred from ever entering the events:

Now, fundraisers can be a dicey place for the media to be. You (almost) never know what kinds of things are said in what is supposed to be behind closed doors — just ask Mitt Romney. To that end, our current president — who greatly benefited from that infamous Romney recording — has barred the press from all fundraising events. No pictures, no recordings, and no questions asked of the richest one-percent in the room paying for exclusive access to the most powerful person in the world. And of course, no questions for the president, either.

But some things are public and others are private, right? We can’t have the press asking Mr. Obama about border security, the escalating Gaza conflict or a passenger plane being blown out of the sky over Ukraine before every putt on the golf course, correct? Same goes for fundraisers… some conversations should be private in the same way they were for a Bush or Clinton.

However, not allowing any access at all… any photos, any questions in the form of a short press conference afterward for the White House Press Corps traveling thousands of miles with the president only to be completely shut out…isn’t exactly how the most transparent administration in history should be conducting itself.

Especially when considering the costs of all 400 of these fundraisers are being paid by taxpayers by a country already in serious debt. To get around the Democratic National Committee from footing the bill, Mr. Obama — during, for example, five recent West Coast fundraising events also had a speech at a Los Angeles community college along the way on job training, thereby making the entire trip meet the prerequisite of being official business for the president. If that’s the loophole, it absolutely needs to be closed before the next president — Democrat or Republican — takes office in 2017. It just looks and sounds so pathetic.

The kind of trips we’re seeing this week — and the 395 before it — are clearly conducted for partisan reasons. We saw the same situation two weeks ago when he was in Texas for two fundraisers there, but couldn’t bother to visit the “humanitarian crisis” (his words) at the border. With taxpayers paying for such a trip, one would think the president would make that trip south, if only to show the American public he at least cares about the situation as a symbolic gesture (and from a political perspective, for better optics). As a result, even fellow Democrats slammed the president for not visiting the border, but the fundraisers were able to raise millions in the effort to help Democrats cling to the Senate in November, so there’s that.

“We think these fundraisers ought to be open to at least some scrutiny, because the president’s participation in them is fundamentally public in nature,” argues Christi Parsons, president of the White House Correspondents’ Association. “Denying access to him in that setting undermines the public’s ability to independently monitor and see what its government is doing. It’s of special concern as these events and the donors they attract become more influential in the political process.”

Adding it all up and putting the 400 number into context, President Obama has already had 82 more fundraisers in five and a half years than George W. Bush had in eight. At this pace, he’ll easily eclipse the record held by President Clinton (638). But the lack of access is about to hit a tipping point: Politico reports that the White House Press Corps is seething at the lack of access. During Wednesday’s event at Costco CEO Jim Sinegal‘s mansion, they were left on a gravel path far away from the event…not even with eyeshot of the house. At an event at a San Francisco hotel a day earlier, well, forget about access…those traveling with the president weren’t even told what floor he was on.

But from Jay Carney to Josh Earnest, the insistence that this is the most transparent administration in history continues to insult our intelligence.

And in the process of shutting out the fourth estate on 400 separate occasions and in the name of party only, it all comes at the taxpayers’ expense.