Concha: Studies Show Obamacare Architect Not Far Off on ‘Stupidity’ Remarks — Here’s Why

Concha: Studies Show Obamacare Architect Not Far Off on ‘Stupidity’ Remarks — Here’s Why 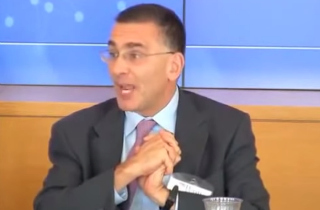 Another day, another public figure not realizing anything and everything is recorded these days…

We’ve seen careers and reputations and campaigns destroyed by the ability to record life’s special moments at the touch of a button on a phone or small camera. George Allen and his “Macaca” moment in 2008. Mitt Romney and the devastating 47-percent tape. Donald Sterling’s racist reaction to Magic Johnson attending his ex-team’s home games. And now we have Jonathan Gruber (no relation to Hans or Simon Gruber), who once revealed during a very public panel discussion what Republicans have been complaining about for years when it comes to Obamacare: The American people were deliberately lied to in order to get the bill passed.

On cue, Gruber has since apologized, stating his remark that the stupidity of the American voter was inappropriate. But in the ultimate exercise in hubris, there’s Gruber again on television (a local Boston station) declaring that it was the GOP who was still trying to confuse people about what’s in it “so that they don’t understand that the subsides they’re getting is because of the law.” And what better person to deliver that message than the architect who advocated purposeful deception and exploited said apathy in the first place? Even Howard Dean is pissed off.

The whole thing reminds me of a painful scene in the underrated romantic comedy/golf movie, Tin Cup. Here you had Kevin Costner’s unconventional Roy McAvoy looking to win the U.S. Open on the final hole. He could lay up on a Par-5 on 18 to send the tournament to a playoff or go for the green in 2 (strokes), two-putt for birdie and win. But for three days straight prior, Costner finds the water in front of the hole each time. No matter…he continues to press forward with the same ill-advised plan. And for 10 straight swings, he finds the water again and again. As the meltdown continues, it gets to the point that an exasperated CBS Sports Executive Producer yells in the production truck to nobody in particular, “Somebody tackle him!” The suspicion here is that most Democrats are yelling the same thing every time Gruber opens his mouth from now until this thing blows over. It all goes back to the first law on holes: “When you’re in one, stop digging.”

Now…that’s not to say Gruber was completely off-base on the whole American stupidity perspective. But instead of “stupid”, perhaps “apathetic” is a better characterization. It’s not that Americans don’t want to know important stuff about the country and how certain new laws could affect their day-to-day lives…it’s that they simply don’t care to educate themselves. Need proof? Check out these numbers as it pertains to the general public’s knowledge on very basic stuff:

According to a survey by the Kaiser Foundation just last year (April), 42 percent of Americans didn’t even know Obamacare was still a law on the books. Some (12 percent) thought it was already repealed by Congress while others (7 percent) believe the Supreme Court overturned it. So why even lie about something that many likely still believe doesn’t exist in the first place? Here’s a few more fun yet disturbing findings to chew on:

As for Rand Paul’s strategy of calling Hillary Clinton’s age into question, check out this recent finding by Pew Research: An eye-popping 69% of 18-29 year olds believe Mrs. Clinton is either in her 50s or younger. Only 27% accurately place her age as between 60 and 69 (she’s 67), while only 2% say she’s older than 70.

So where do we rank on the stupidity scale when compared to other Western countries? Bloomberg was kind enough to just publish its Ignorance Index, where we earned a dubious silver medal. Ranking of most-to-least ignorant below:

So was Gruber completely off when he called Americans stupid? Maybe. “Apathetic” and/or “too distracted to care” may have been a better way to go. Is that something he should have so proud of to share? Absolutely not.

Not that Gruber should be excluded from the conversation, of course. After all, how does anyone not realize just about everything is recorded these days?

Especially — you know — panel discussions witnessed by hundreds of people.