Connor Ratliff, Age 36, Debates Jimmy McMillan In The Only Presidential Debate Worth Watching 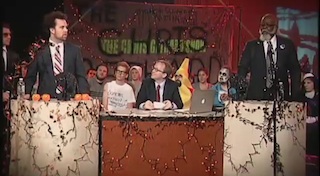 Connor Ratliff exploded onto the presidential race scene last August when he premiered his simple and effective platform; the Constitution said you have to be 35 years old to be President and he is 35 years old. However, things seemed to grow dark for the candidate last September when a huge scandal broke (he had a birthday). Ratliff has seemed undaunted though as he organized his own debate, inviting all the major 2012 candidates and arguing that, if they didn’t attend, they didn’t really want to be President. Well, unfortunately, it appears that Ratliff and the Rent is Too Damn High Party’s Jimmy McMillan are the only ones who really want it.

Fortunately, the ensuing debate turned out to some of the greatest political discourse (and strangest television) the nation has ever seen.

Not that everything went without a hitch. The debate was hosted by The Chris Gethard Show, Mediaite’s favorite late-night public access variety show, and, regrettably, was double booked with the show’s annual Halloween Spook-tacular. Both candidates, though, were unfazed by the spooky decorations covering the studio, the costumed audience members, or the Halloween-themed music.

Ratliff and McMillan were quick to go after each other right off the bat. However, they found common ground in their attacks on the candidates who didn’t attend and the media who only focussed on a select few. In a serious moment, McMillan pointed out that smaller debates like last night’s were needed when those carried by CNN or Fox News would not allow smaller, more grass roots candidates such as himself to attend. And Ratliff decried a media that would label he and his debate opponent as “novelty candidates” when they, arguable, have just as much a chance and are just as serious as headline-grabbers Herman Cain and Rick Perry.

Ratliff and McMillan also argued over whether or not the White House of the future would have indoor or outdoor toilets.

Seriously though, while the American audience may have questioned who their 2012 selection was going into last night’s event, afterwards, only one question remained: Great debate or the greatest debate.

Watch the entire debate from The Chris Gethard Show below. It’s pretty wonderful.