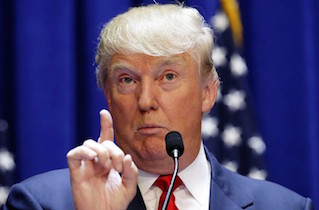 Ever since 2008 when the late Andrew Breitbart and I became convinced that Matt Drudge was seemingly out to help Barack Obama win the primary (specifically on the Rev. Jeremiah Wright issue), I have been extremely suspicious of the “conservative” media and their true agenda. One of the more laughable misconceptions the left has about the “conservative” media is that it is motivated primarily by a desire to promote the conservative cause and to win elections.

If this notion wasn’t already proven to be absurd, the emergence of Donald Trump and all that he has wrought on the process of choosing a GOP presidential candidate should forever end any debate.

The “conservative” media should be almost universally ashamed by how they have alternatively allowed, enabled and promoted Trump (whom I have met and was verbally supported by for my work on the 2011 Penn State controversy) as a “legitimate” GOP contender. Trump is not remotely conservative, he is not trustworthy, he can’t possibly win a general election or even the nomination, he’s also very close to the Clintons, and he has made it very clear that he is more than willing to sabotage the GOP candidate.

Other than that Mrs. Lincoln, how was the play?

And yet Drudge, Ann Coulter, Rush Limbaugh, Mark Levin, and Sean Hannity (all of whom are connected through friendships) have promoted or praised Trump to various degrees. Fox News, while they were “tough” (really?) on Trump during the debate, basically gave birth to his candidacy by having him on their air, and treating him respectfully, dozens of times. The Breitbart website, in a development which surely has Andrew rolling over in his grave, has even been accused of being literally on the take for Trump (though it could just be that they realize that Drudge will grant them big traffic by linking to pro-Trump stories, or even YouTube videos done by random unknown black women).

Why has this happened? Well, it is not because anyone believes that Trump could beat Hillary Clinton or that Trump would even make a remotely good president (unless of course entertainment value is all we now care about, which seems increasingly to be the case).

Instead, it has occurred because Trump — just as he would be happy to tell you — is great for ratings, especially during the slow summer months. Now that he is the “frontrunner,” (who can not win the nomination because the rules force him to win a majority of votes in at least eight states, which is never going to happen) all “news” outlets now have a perfect excuse for continuing to cover him endlessly. Many so-called conservative outlets are now afraid to fully destroy Trump for fear of alienating 25% of their angriest customers and because they don’t want to the Golden Goose of summer ratings to die.

What makes this development particularly dangerous is that this is not simply a distraction which will fade into irrelevance like, for instance, the ridiculous 2012 GOP flirtation with Herman Cain. Because of Trump’s celebrity, money, ratings power, and ego, there seems to be little reason for Trump to ever leave the race unless his support becomes miniscule, which, with all of his advantages seems like an impossibility, at least in the short run. This means Trump’s presence will have a significant and almost surely cancerous impact on who is the eventual GOP nominee, as well as how well they would be positioned to take on Clinton.

Trump soaking up all of the media attention and distracting from candidates who can actually win makes it far less likely that the right candidate (in my view, either Scott Walker or Marco Rubio) will emerge from all of the chaos unscathed. After all, for any other candidate to catch the eye of a conservative base which is now acting like a sixteen-year-old girl crazy for a bad boys, they are going to have to do something “un-presidential” or too “right wing.” This will surely then come back to haunt them in a general election where most of the news media will be more than willing to attack on Hillary’s behalf.

Here is where most people really fail to understand the most fundamental incentives for the majority of the conservative media. For someone like me who is not chiefly motivated by commercial interests, the entire goal of this primary process is to produce the candidate with the best chance to beat Clinton. Unfortunately, for most “conservative” outlets they have a huge disincentive for that to happen.

It is so simple that you would think that it would be universally understood, but the reality is that very few conservatives realize the undeniable fact that the worst possible development for a “conservative” news/opinion outlet would be to have a Republican president. It would be ratings and content death for them, especially considering the only type of Republican that the news media would ever allow to be elected (Walker?) would have to be at least somewhat boring.

To be clear, I am not alleging “conspiracy” here. There is no meeting which outlines the secret plan to make sure that a Republican president doesn’t make life more difficult and less profitable for conservative news outlets. It is simply a situation where everyone individually pursues their own obvious self-interest. In short, the “conservative” media simply doesn’t care that it is doing things which hinder the cause of beating Hillary Clinton, especially when it is bringing good ratings in the short run.

The “conservative” media is proving once again in its flirtation with a charlatan like Trump that they are not to be trusted. Unfortunately, most of the conservative base, so mistreated by all other forms of news media, refuses to see this obvious reality, for fear of having their entire world shattered. They do so at the peril of their movement and the country future.

The bottom line here is that Hillary Clinton (who has made it clear she fears Walker and Rubio most) could not be happier with how things are progressing on the Republican side. She is an incredibly vulnerable candidate, but the seeds of her likely ultimate victory are currently being sown by those wrongly perceived to be her political enemies.

— —
>> John Ziegler is a documentary filmmaker and a nationally-syndicated radio talk show host. You can follow him on Twitter @ZigManFreud.