Cuban Exile Testifies Against Gun Control: ‘You People Don’t Know What Freedom Is Because You Never Lost It!’
video

Cuban Exile Testifies Against Gun Control: ‘You People Don’t Know What Freedom Is Because You Never Lost It!’ 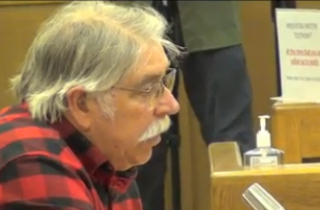 At a hearing last week in Salem, Oregon, local resident Manuel Martinez testified against gun-control measures. The Cuban-born Martinez spoke calmly but firmly about the dangers of gun control, incorporating his experience in Communist Cuba.

Martinez began by noting: “I oppose any manipulation, any regulation, elimination, or disruption of the Second Amendment of the Constitution of the United States.”

Drawing upon his experience in Cuba, he recalled: “In 1959, a revolution with individuals, malicious individuals, masquerading as Democrats… established a regime, a dictatorial regime, in my nation, called Communism, Socialism, Stalinism, Marxism and whatever other ‘ism’ you want to [call] it.”

Martinez noted the regime stripped the populace of its arms, even though:

Martinez then recalled his own first-hand experience, choking up and holding back tears:

He also warned that infringing on the Second Amendment would “open” this nation to the possibility of a dictatorial state, noting:

Click below for video of the brief testimony, courtesy of Daylight Disinfectant:

[h/t to journalist Dan Sandini, who filmed and uploaded the testimony]