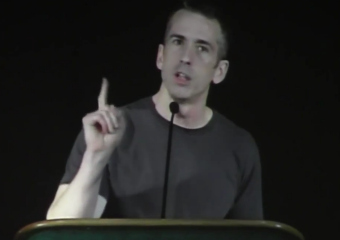 This morning, California high school teacher Rick Tuttle appeared on Fox & Friends to discuss how his religious students walked out of a journalism conference keynote address given by Dan Savage, the famed gay rights activist/columnist. Savage spoke about anti-bullying, but spent a great deal of time bashing the Bible:

As Tuttle’s Christian school students walked out, the remaining crowd of high schoolers applauded and hollered wildly at these remarks. Most of what Savage says is true: anti-gay politicians often invoke the Bible in their policy decisions. And if those same politicians can ignore many of the strange things the Bible prescribes regarding menstruation, slavery, etc., then perhaps they can ignore its views on homosexuality.

It’s a valid point. But, of course, to make that point to a conference of high schoolers, Savage needn’t be so crass.

After he completed his anti-Bible rant, Savage said this:

Sure, anti-gay political figures do react poorly when you push back on the Bible. And in America, It does seem like Bible-bashing is met with significantly more outrage than are generic homophobic remarks. But those “Bible guys in the hall” didn’t beat you up, Dan. They are just Christian students who feel unwelcome during your speech’s aggressive Bible-bashing. You really didn’t need to insult them after they had already left. Besides, you can’t fault the students for doing exactly what you would tell bullied homosexuals to do when they felt bullied: walk away.

As a proudly heterosexual (Hi, Jen!) libertarian committed to advancing gay rights, I think Savage does a lot of good. His “It Gets Better” campaign is an inspiringly non-aggressive response to the anti-gay prejudices of bullies and politicians alike. We need more hopeful messages like that.

But when Savage behaves this way, he does more to hold back the equality movement. I understand he has no interest in converting Bible-thumpers to see the world his way, but when gay rights activists stoop to the same level as gay-bashers, and become religious-people-bashers, they polarize the debate even further. The word “tolerance” should always be Savage’s greatest weapon, and he would be better served to consistently espouse a live-and-let-live view of humanity: “So long as I don’t physically harm you, why should you care what I do? I don’t care that you are religious and find my lifestyle offensive. Leave me alone, and I will leave you alone.”

In other words, if you preach to someone, “Don’t be a dick,” you probably shouldn’t be a dick yourself.

And this behavior just provides more fodder for conservative blogs like The Blaze and Breitbart, who clearly aren’t going to come around to Savage’s side. When Savage throws them a softball like this one, they take the opportunity to link him to the White House and reveal his past provocative statements. All of this only makes the gay rights movement look hateful in the eyes of our opponents.

Watch a portion of the offending speech below: