Did Carl Cameron Sell Out Fox News To DailyKos? Not According To Cameron 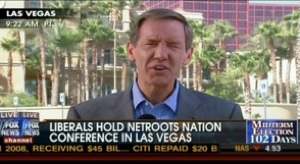 Did Fox News reporter Carl Cameron sell out his own network to a DailyKos blogger? That’s what Daily Beast contributor Steve Friess would have you believe. In a story posted yesterday, Friess claimed to have overheard Cameron say that Fox News has both organized the Tea Party and overreached in their influence over the Shirley Sherrod scandal. Mediaite exclusively spoke to Cameron, who explained that much of what was reported was not only taken out of context, but overheard by someone eavesdropping on a private conversation.

First some background. Friess is described by The Daily Beast as “a veteran Vegas-based freelancer whose work appears in the New York Times, Newsweek, USA Today, the LA Times and many others.” In this specific piece, he reports:

Cameron, speaking to blogger Dante Atkins shortly after Atkins had been interviewed for a Fox segment about the Netroots event, nodded as Atkins repeated comments he made on camera that the Tea Party movement was largely organized by Fox News hosts like Glenn Beck and Sean Hannity.

“Tell me about it,” Cameron smirked.

As the conversation continued, Atkins, a Daily Kos front-pager, cited examples of Fox’s undue sway over events. Cameron then offered one of his own.

“The Sherrod case is an example of some at Fox News trying to have more influence than it probably should,” Cameron said.

It might be relatively interesting for an employee to complain about his or her employer, if it wasn’t such a commonly held practice by nearly every single employee in the world! But in this instance, its clear that Cameron wasn’t even guilty of that, since — more importantly — the specific quotes attributed to Cameron were not delivered to the reporter. Rather, they were over heard by Friess who was standing nearby listening in to a private conversation. Or as Friess describes:

Cameron told The Daily Beast Thursday night that this report takes his remarks out of context and that he was actually defending the integrity of Fox’s news division. He insisted this reporter did not hear the entire discussion, even though it began immediately after this reporter’s interview with Daily Kos blogger Atkins had concluded.

Cameron is hardly known as a partisan hack reporter — he’s well respected in Washington. In an exclusive interview with Mediaite, he took the high road, saying “this isn’t a surprise to me. This is what happens when you cover conventions like this.” Cameron added “It’s so silly that what they are doing, in attacking me, is exactly more to do with their obsession with Fox News.” Cameron summed up “Its the same thing with Shirley Sherrod. Taking comments totally out of context and not listening the meaning of what’s been actually said.” To be clear, Cameron wasn’t comparing himself to Sherrod, but rather the highly partisan environment in which we now find ourselves.

As for the Tea party Coverage, Cameron is proud of his coverage. “This is one of the most important stories in politics this year. I’m proud of it from a journalistic standpoint – not from an ideological one.” Adding, “I was reporting on this more than a year ago and has been way ahead of the pack including the NY Times and Washington Posy – before anyone even knew the factions that were causing the dissent, I was there reporting on it.”

To be fair, Cameron is not immune to some controversy with those who define themselves as left-of-center. In the 2004 Presidential election, Fox News apologized for a made-up web news article penned by Cameron that was critical of John Kerry. But critics of his right-wing bias will be disappointed to learn that he was also the first to report that the McCain camp expressed sincere frustration with Sarah Palin, sharing embarrassing details about her lack of knowledge about…well, a lot of stuff.

Sadly, we now find ourselves in a strange and post-modern world in which individuals/reporters/bloggers are first looking for evidence that supports their pre-existing opinions. So in the eyes of this reporter, if you aren’t somehow offending someone in how you are reporting the news, you probably aren’t doing your job.